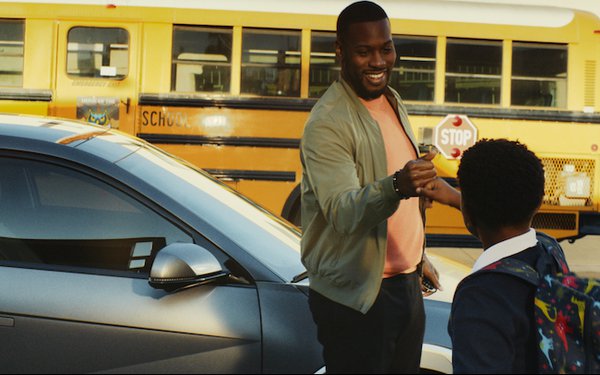 Hyundai Motor America is emphasizing the convenience of an electrified lifestyle in new creative for the Ioniq 5.

The spot shows a “lifestyle without limits” and plays up the advanced features and technology of the electric vehicle, said Angela Zepeda, CMO, Hyundai Motor America.

The “Okay Hyundai” theme is designed to strengthen the connection between Hyundai and the African American community through the embedding of cultural references and nuances in the creative, says Eunique Jones Gibson, founder and chief creative officer of Culture Brands.

The spot tells the story of Uncle Miles as he picks up his nephew Blake from school for a guys’ night. The Ioniq 5 is the hero of the journey, impressing all of Blake’s friends at school.

The two are off to pick up snacks while the vehicle charges from 10%-80% in 18 minutes. The two then head home, where the vehicle is shown powering an outdoor video game night using the garage door as the projection screen.

“We are continuing to push for representation and dynamics that showcase African American lifestyle and relationships not prominently shown in the media,” Gibson says in a release. “Through Uncle Miles and Blake, we’re reminded that there is hope for the future when we lead by example.”

The effort, which includes 15-, 30- and 60-second versions of the spot, includes video, radio, digital and influencers executions.