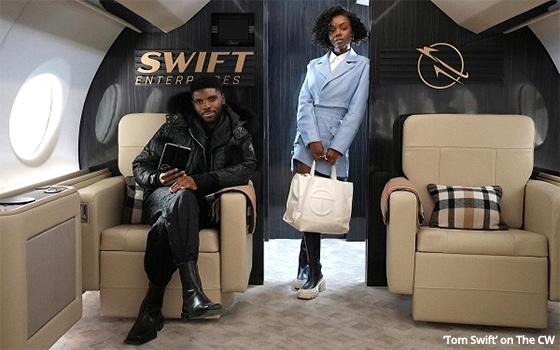 Anyone familiar with the “Tom Swift” book series for boys will likely not recognize the character as he has been re-created for a new series of the same name coming to The CW next month.

On the other hand, there may not be that many people alive today who are familiar with the “Tom Swift” books.

The character dates back to 1910. Tom Swift was originally a precocious teenage inventor who had adventures related to the gadgets he would dream up.

The books were aimed at boys, and apparently were enormously popular. In fact, they must still enjoy some popularity because, according to Wikipedia, there were new ones published as recently as 2019. In total, the “Tom Swift” books comprise about 100 volumes.

The TV Blog has never read any of the “Tom Swift” books and therefore cannot claim to have first-hand knowledge of them.

But judging from a preview of the premiere episode of CW’s “Tom Swift” series (premiering May 31), the new Tom Swift bears very little similarity to the original.

The 21st-century Tom Swift (played by Tian Richards, pictured above) is African-American, gay and a member of a rich and powerful family headed by his industrialist father.

This new Tom Swift is still an inventor though. In the show, he has designed an interplanetary spacecraft that is capable (hopefully) of landing a man on Saturn. In the premiere episode of “Tom Swift,” the man taking this craft’s maiden voyage is Tom’s dad.

This Tom Swift is definitely not a teen and this “Tom Swift” is not exactly aimed at kids, as evidenced by a no-holds-barred sex scene in which Tom intertwines passionately with a man he just met.

But that last sentence is where any resemblance between this blog and an out-and-out review of this show ends because The CW requests that journalists and columnists hold off on reviews until a later date. OK by me.

According to several histories found online, “Tom Swift” was the brainchild of a publishing entrepreneur named Edward Stratemeyer who created the character and scores of others for book series aimed at boys and girls.

He launched his own company -- the Stratemeyer Syndicate -- to manage, publish and distribute his many books.

CW’s press material even includes a mention of Stratemeyer. “The series is inspired by the ‘Tom Swift’ book series that hails from Stratemeyer Syndicate, which also publishes the ‘Nancy Drew,’ ‘HardyBoys’ and ‘Bobbsey Twins’ books.”

Despite that citation, conclusive information about Stratemeyer -- specifically who owns it now and, by extension, its many book titles -- could not be found in a Google search.

However, whoever manages these titles today is still reaping benefits from some of them. Indeed, CW currently has a “Nancy Drew” series on the air.

It is at least the third “Nancy Drew” series that has been made for television. The Nancy Drew character was first introduced in 1930.

Similarly, another Stratemeyer property, “The Hardy Boys” -- first published in 1927 -- has come to television a handful of times too, at least once in an animated version.

“The Hardy Boys” seem to have eluded The CW thus far. The most recent “Hardy Boys” TV series started running on Hulu in 2020.