Mike Myers Is Man Of Many Faces In New Netflix Comedy 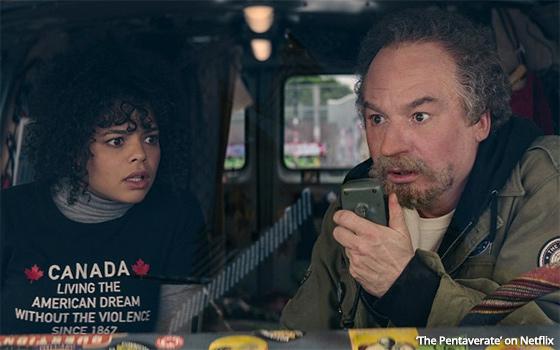 Mike Myers plays at least seven different characters in just the first episode of his new comedy series “The Pentaverate.”

He might even play other ones too. That’s how deeply he submerges himself in costumes, makeup and even accents, both foreign and domestic.

For example, I was able to recognize him in those seven roles, but I knew some of them only because I saw photos with captions on the Netflix media website where various publicity assets are posted for journalists.

And he might even be doing more than seven. One character I wondered about was a giant Sasquatch, but this was impossible to determine because the character was decked out completely in thick black fur.

If the paragraphs above demonstrate anything, it is that anything is possible on this show, including its comedic contents.

Like some other examples of the current generation of movies and TV shows, “The Pentaverate” is a rare comedy that traffics in sexual and scatological content, but manages to be as funny as its comedy bits are shocking.

This is the kind of comedy that you feel on some level is just wrong, but you watch it anyway. It is a trait shared by only a handful of comedic movies.

Two that come immediately to mind are the first "Borat" movie, and more recently, the Kevin Hart-Will Ferrell comedy “Get Hard.”

As a satirical, streaming comedy, “The Pentaverate” ambitiously covers a lot of ground. It is a send-up of news media, Canadians, conspiracy culture, and fanciful novels and movies about secret, mystical organizations.

On all these subjects, the show’s characters, settings and especially its writing are right on the money.

“The Pentaverate” itself is a mysterious group of five men -- some geniuses and some not -- who supposedly have secretly controlled the world since the 1300s.

Their secret headquarters is concealed within one of the colossal new office buildings in Manhattan’s Hudson Yards -- the building with that large triangular terrace jutting out of it near the top of it.

The premiere episode has the group seeking to replace a recently deceased fifth member. So, the group kidnaps a scientist played by Keegan-Michael Key.

He is just one of the recognizable stars who turn up on the show, including Rob Lowe, Debi Mazar, Maria Menounos and Ken Jeong -- some just for cameos and others recurring. Jeremy Irons narrates.

The very idea of this group of five supported by a small army of hooded henchman is a send-up of “The Da Vinci Code.”

Conspiracy culture comes in for satire in the form of at least two characters played by Myers, both of whom are first introduced at a convention of conspiracy buffs called the Canadian Conspiracy Convention, or CanConCon.

Attending this event is an over-the-hill reporter for a Canadian TV network (also played by Myers) who needs to find a new, spectacular story if he is to keep his job. More than any other character, the newsman is the show’s central figure.

The comedy in this show is profane, smart, just plain gross, and in all ways hilarious.

Some of it is unabashedly immature, such as the name of the Canadian network known by its initials C-A-C-A, pronounced CACA.

In addition, one of the pentaverate members is an English aristocrat (Myers) named Lord Lordington, which is not unlike the way butlers were named Jerkington and Sappington in old Three Stooges movies.

Canada -- where Myers was born and raised -- is the subject of endless bits of affectionate humor. For example, one character wears a t-shirt that reads: “CANADA: Living The American Dream Without The Violence Since 1867.”

In addition, all of the Canadian characters are exceedingly nice to each other, even in a scene when the news reporter’s boss informs him that she is forcing him into retirement. Be assured that she does this in the nicest way possible.