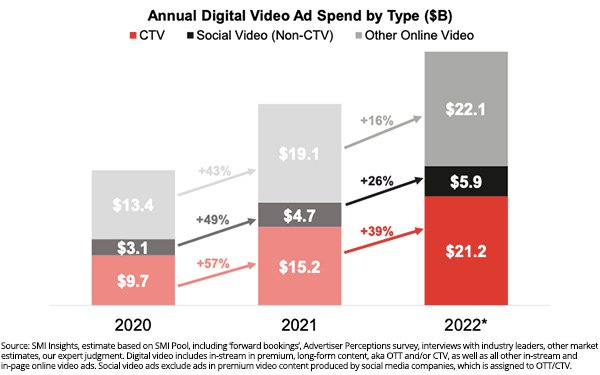 Although it will have a 36% share of total video time spent, connected TV (CTV) will take only 18% of total video ad dollars in 2022 and is estimated to reach $21.2 billion by year's end, per a

Data estimates were calculated when including all CTV, linear TV, social and short-form video ad spending.

The report estimates average time spent per day in 2022 for CTV to be 1 hour/44 minutes, with linear TV at 3 hours/2 minutes, according to eMarketer January 2022 data.

While CTV will have a 18% share of total video ad spend in 2022, linear TV will come in at 57% and all other digital video will have a 25% share, according to Standard Media Index. The data for the report is based on the "SMI Pool," which includes "forward bookings."

Advertiser Perceptions interviewed 406 executives who spent at least $1 million on advertising in 2021, in a 15-minute anonymous interview during the period from February 15, 2022 to March 15, 2022.

Advertiser Perceptions is a research and intelligence firm for advertising, marketing and ad-tech businesses.

The IAB survey says 73% of buyers are expected to shift their media spend from linear TV to support their increase in CTV and OTT ad spend.