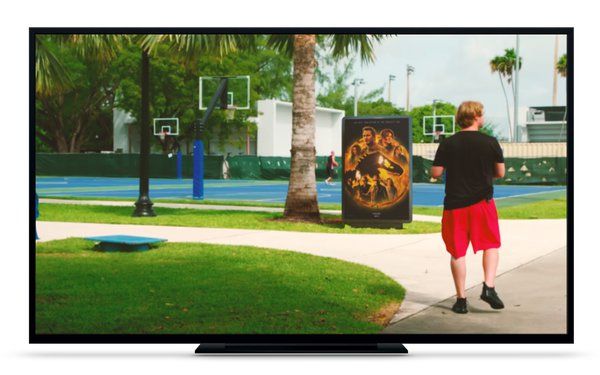 NBCUniversal is launching and testing new advertising innovations for its Peacock streaming service.

The first is Peacock Frame Ad, where a display ad can be “framed” around video content such as a golf event.

Speaking at the IAB Newfronts event, Peter Blacker, executive vice president of agency partnerships for the NBCUniversal advertising and partnership group, said the ad frame can be used for a live golf event, for example, where the advertising activation can be "dynamic."

"We can geotarget," says Blacker. For example, fans in New York could see Talenti, a Unilever gelato and sorbet brand in the frame. In Seattle, viewers could see a different Unilever brand -- Breyer's Ice cream.

“We can also add commerce,” Blacker says-- with a QR code displayed on screen where viewers can order products and within minutes get delivery via a new NBCU partnership with Gopuff, a commerce delivery platform.

NBCU is also testing something called Peacock In-Scene Ad, where a brand's product and/or messaging can be digitally inserted into the video through post-production.

“It can put [products] in the scene,” says Blacker. For example, for the Bravo’s “Real Housewives” series, a brand may appear in the background through an out-of-home signage display in a park setting.

“Those brands may change depending on when you watch and what your interests are,” he says.

Blacker says when NBCU’s Jurassic World Dominion” appears in June, an ad for the movie could appear. A few weeks later, that same signage could have another movie, such as NBCU's “Minions: The Rise of Gru.”

He says this can be especially useful for unscripted programming content.

Last week, NBCU announced the Peacock Ad Manager, a self-serve programmatic service for performance marketers, which will launch in the second half of this year. It will be incorporated into Peacock AX audience management platform.