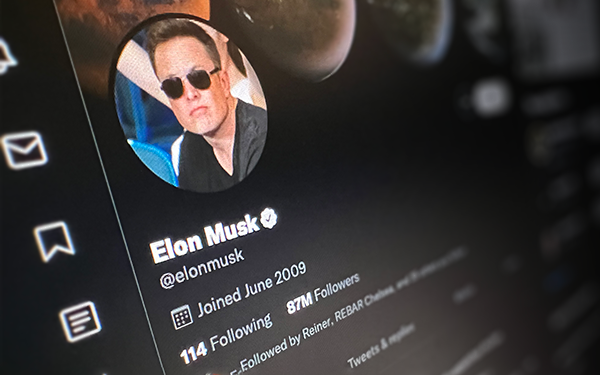 Elon Musk has told potential investors in Twitter that he plans to take it public again as soon as three years after his $44-billion acquisition of the social platform is consummated later this year.

He's also now stated that businesses and governments may be charged for using the social platform once he is at the helm.

"Twitter will always be free for casual users, but maybe a slight cost for commercial/government users," he tweeted on Tuesday.

Meanwhile, Musk has politely put off a request from the U.K. Parliament's digital committee inviting him to testify about his plans for Twitter "in more depth."

The U.K. government wants to push through an Online Safety Bill that would allow its media watchdog, Ofcom, to levy fines of up to 10% of a company’s global annual revenue for violations.

On the other hand, Musk's vague statement that he wants to "authenticate all humans" would dovetail with U.K. lawmakers' desire to require universal verifications for social users. (Last week, the European Union warned Musk that he will have to adhere to its incoming Digital Services Act, which will force platforms to take down illegal content more rapidly, and provides for jail time for tech execs who refuse to cooperate.)

Musk's reply to the U.K.'s request: "I am honored and thank the Parliament for their invitation, but it would be premature at this time to accept, given that there has not yet been a shareholder vote," he said in an emailed statement to ABC News.

On the Twitter acquisition funding front, Musk has continued to woo private-equity firms to become investors in order to reduce the $21 billion he needs to contribute as the plan stands, The Wall Street Journal reports. PE firms tend to make profits by acquiring and fixing struggling companies, then taking them public within a few years.

The funding plan currently calls for Musk to borrow $12.5 billion through loans backed by $62.5 billion worth, or roughly 40%, of his shares in electric-car company Tesla. Tesla and some of the banks involved have established rules requiring Musk to put up more collateral if Tesla’s share prices fall, notes WSJ.

Conveying an intention to stage an initial public offering for Twitter -- and floating the idea of increasing revenue by charging businesses and governments to use the platform -- are likely meant to reassure PE firms that he is serious about making Twitter profitable.

Musk’s frequently brash remarks/tweets have included stating that he doesn’t care if he makes money on the Twitter deal, and he also “has a history of missing his timelines and targets at Tesla,” WSJ points out.

As for charging to use the platform, he characteristically left all specifics unaddressed, including whether nonprofits or journalists would be exempt.

Twitter, which has lagged far behind rival social platforms in generating revenue, is already testing Twitter Blue, a service that offers additional functions for those who pay ($2.99 per month in the U.S.), in North America, Australia and New Zealand.

Musk has said he wants to reduce the price of that service and make changes--including dropping ads, notes CNBC.