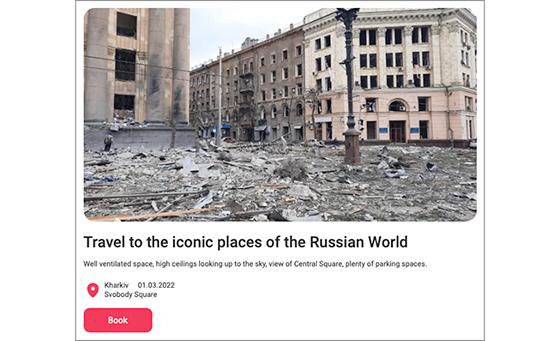 Throughout Russia’s two-and-a-half-month invasion of Ukraine many Russians continue to buy in to their country’s propaganda that reports of Russia’s brutal destruction of much of Ukraine and its unprovoked killing of thousands of Ukraine citizens is fake news.

In response, Ukrainian ad agency Bickerstaff.734 has created a pseudo-tourism campaign designed to make ordinary Russian citizens aware of what is really going on.

The agency chose tourism as the approach because it has become a very limited option for Russians since major travel companies like Airbnb and Booking.com have suspended all operations in Russia and Belarus.

Working with Ukraine’s State Agency for Tourism Development, Bickerstaff.734 created a website imitating Airbnb service that invites would-be Russian tourists to “travel to the iconic places of the Russian world.”

If a booking is attempted the user is transferred to a channel on the social network Telegram with news about what is really going on that is billed as “a channel with true news for those who have friends and relatives in Ukraine.”

The war has effectively cut off most Russian citizens from the outside world, says Bickerstaff founder and creative director Ilia Anufrienko. “It’s about the isolation that we wanted to cover in this campaign,” she said. “If Russians don’t want to be isolated and bottled up in their destruction and aggression, it’s important to know the truth about this war and start resisting the regime.”