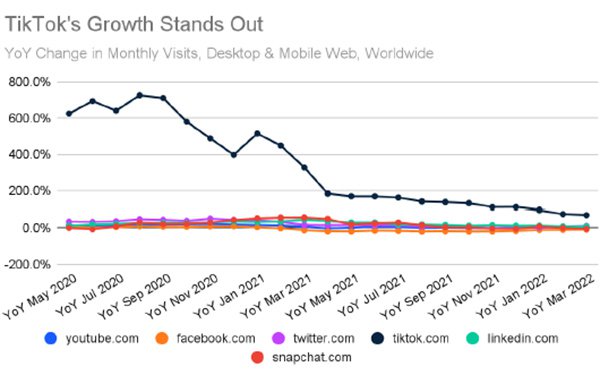 A new report by digital intelligence provider Similarweb compares advertiser and consumer interest in Tiktok to its competitors, and shows that the short-form video app is growing rapidly while Facebook and Twitter struggle to maintain solid footing.

Advertiser interest in TikTok is accelerating, while its competitors are seeing slowing growth or even shrinking traffic to their ad portals.

According to Similarweb's estimates, traffic directed to ads.tiktok.com was up 199% year-over-year in Q1 2022, compared to just 22% for Facebook and only 3.6% for Twitter.

Although the report shows YouTube is a close second with an estimated daily user time of 1 hour and 19 minutes.

Comparably, traffic to twitter.com was only up 11%, and traffic to facebook.com was down 9.3%.

It is well known that TikTok is capturing the attention of younger audiences who have begun to stray from other social media platforms.

About one third of the TikTok desktop and mobile web audience is in the 18-24 age range, which accounts for just 24% of Facebook's demographics, the report shows.

TikTok has even pulled ahead of Snapchat as the favored app among teens.

“TikTok is running away with the all-important youth audience for social apps, and advertisers are rewarding it,” David Carr, technology analyst, told Digital News Daily. “The fact that TikTok is innovating in the ways users can participate as creators, as well as in ad formats companies can use to make themselves part of the conversation, are both factors in its success.”

TikTok’s current monthly active user base has already surpassed 1 billion worldwide, and a study conducted in November 2021 by App Annie forecasts that this number will be 1.5 billion by 2024.

“While TikTok is still smaller than the bigger social media names, when we look at the rate of growth in traffic to either its site or its ad portal, it's like the others are standing still,” Carr added.