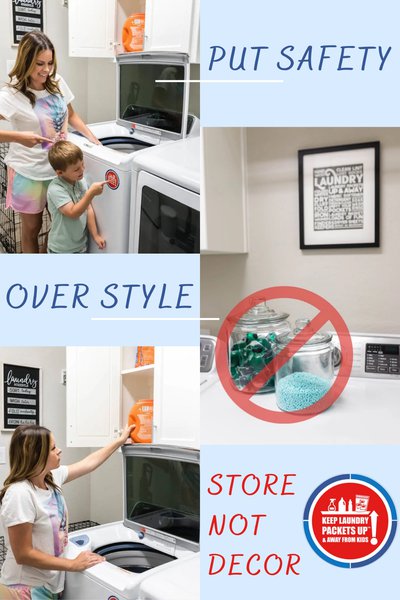 The American Cleaning Institute (ACI), whose 100+ members include industry heavyweights Clorox and Procter & Gamble, has launched “Store Not Décor,” a paid Pinterest campaign designed to counter a growing number of social posts that visualize what the group decries as unsafe laundry room storage trends.

Pinning the blame for the trend on the growing popularity of household organizing since the pandemic began two years ago, ACI has taken direct aim at photos displaying liquid laundry packets and other cleaning products in glass or clear plastic containers.

While this “may look nice,” ACI says, “it creates a serious safety hazard for young children, and older adults with cognitive disorders.”

How prevalent is this social media trend?

Citing results from an Ipsos poll of 1,005 adults conducted in February, ACI reported that 30% of Americans had seen posts where cleaning products or liquid laundry packets were stored outside of their original packaging -- and that 68% of those respondents had tried or considered trying a new cleaning product storage idea after seeing it online.

Store Not Décor is an outgrowth of ACI’s five-year-old Packets Up initiative -- which originally aimed to get liquid laundry packets, introduced just 10 years ago, placed high enough in laundry rooms so they’d be out of the reach of kids.

Then came COVID-19 -- and the “distributing trend” of social media photos showing not only liquid packets but also powder pods being “taken out of their original containers” and used as decorative items, Brian Sansoni, ACI senior vice president communications, outreach and membership, told Marketing Daily.

Store Not Décor was first launched as an ACI initiative about a year ago, but the group and its member companies upped the ante in January by sending a letter to the Pinterest Executive Committee. According to a press statement, the letter alerted the platform to the trend, while “flagging Pinterest's role in promoting safety and curbing the spread of dangerous practices.”

“We never heard back,” Sansoni said, despite following up with several emails.

While “the courtesy of a response might have been nice,” Sansoni said ACI next decided to get “get right to the heart of it” via a three-month paid advertising campaign on the platform.

Targeting such Pinterest groups as “laundry décor,” the campaign’s four ads -- which urge consumers to “put safety over style” -- have already garnered 50,000 impressions since launching earlier this week, along with 1,200 clicks bringing users to storage tips and resources on ACI’s website.

Packets and pods now make up some 20% of all washing machine and dishwasher detergent sales, according to ACI.