It's A Pain -- Not. Salonpas Aims To Soothe Aches With Patch Samples 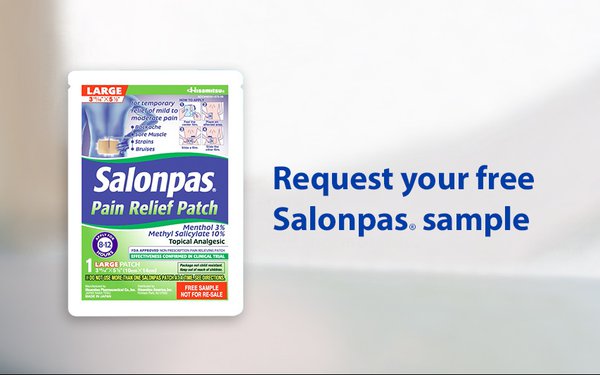 Salonpas Day, an annual event in which Hisamitsu America provides thousands of samples of its popular pain patch to consumers, is back.

Until COVID-19 hit, Salonpas Day meant distributing samples in person on May 18, a day chosen because 5/18 in Japanese sounds similar to “ko (5) ri wo i (1) Ya(8) su”  which translates to “relieve stiffness.”

Due to the pandemic, this year’s offering of 100,000 free samples of large-sized Salonpas is again being conducted via online requests, with outreach already underway via social media ads, which began April 29, and a :15 spot running this week on cable and broadcast, including “ABC World News Tonight,” “CBS Evening News” and “NBC Nightly News.” The spot, from ADK America, is the same one that Salonpas ran last year.

Already, though, after some 10 days of advertising via Twitter, Facebook and Instagram, 38,000 people have requested samples – a number “significantly higher” than ever, according to Vorticom, which handles the social media ad campaign.

The target audience for Salonpas Day is Americans aged 40+.

Launched over the counter in the U.S. after receiving the first-ever FDA approval for a topical analgesic pain patch, Salonpas’ roots go back much further – to  a pain poultice that Japanese parent Hisamitsu began peddling door-to-door 175 years ago, eventually leading to a transdermal drug patch in 1934.

And yes, as always, Salonpas ends its TV spot with female voices singing the word “Hisamitsu.”