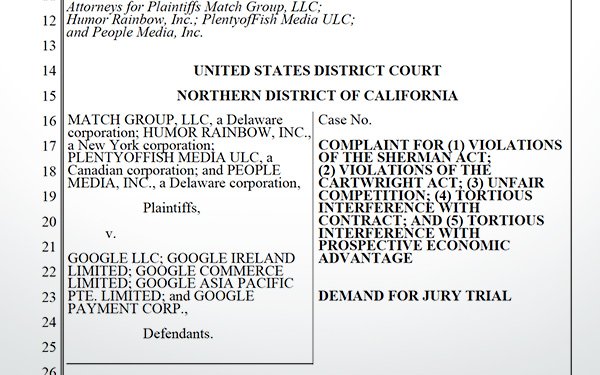 Match Group, the company behind Tinder, OkCupid and Match.com, has sued Google, alleging that the search giant runs an illegal monopoly in the Google Play Store and that its in-app payment policies are anticompetitive, including the 30% cut the company gets for some in-app purchases.

Shar Dubey, Match Group CEO, in a release called the move a "measure of last resort." Google also informed Match that its apps will be removed from the Google Play Store at the beginning of June unless Match complies with a rule introduced in 2020 requiring apps to exclusively use Google's in-app payment processing.

The suit -- filed on May 9 in the U.S. District Court for the Northern District of California -- seeks an “injunctive and other appropriate relief for the material, irreparable harm Google's manipulation of markets, broken promises, and abuse of power have caused (and continue to cause) Match Group and its customers.”

The company also alleges that Google has a “stranglehold over Android app distribution,” because less than 10% of app downloads on Android devices happen outside the Google Play Store.

Match Group claims that Google forced the company to limit the way its customers pay for services, requiring them to use Google Pay Balance (GPB) for all in-app purchases. Google also charge a “service fee,” something like a tax of up to 30% on every in-app purchase made. The fees force developers to charge users more for their services and use resources they would otherwise invest in employees, technologies, and user-requested features. Monopolizing the market, Match Group said, for in-app payments will further cement Google’s near-total control of the Android ecosystem.

Match Group also cited Google’s deal with Spotify, which permitted its users to choose between Spotify’s payment platform and GPB. The deal Google called “User Choice Billing” did not offer anything new for developers or users.

When Match Group asked to participate in the same deal given Spotify, the company said, Google rejected Match Group’s request, describing “User Choice Billing” as a “pilot program” that was still under development.

Google responded on Monday that Match Group is trying to get out of paying for the services Google provides as part of its platform.

“Google Play has been the launchpad for millions of developer businesses to connect with consumers around the world,” Wilson White, VP of government affairs & Public Policy, wrote in a post. “That’s because we’ve earned the trust of billions of users as a safe place to find great apps and games.”

In a long list of grievances in opposition to the lawsuit, White wrote that the fees cover a range of services and processing fees, and they are the lowest among major app stores.