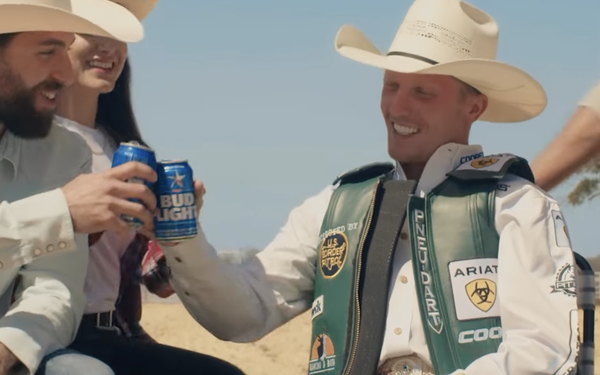 Anheuser-Busch has deep roots in Texas. The company even owned Lone Star Brewery, the “National Beer of Texas,” for some 50 years, from 1895 until 1940. Some 25 years later, in Houston, A-B opened its fourth U.S. brewery.

The Houston brewery is now a powerhouse for A-B, its 40-year-old top brand Bud Light, and its massive Texas audience.

Indeed, A-B says that one in every seven Bud Lights sold -- or 14% of the brand’s total -- is sold in the Lone Star State. Not bad, considering that Texas comprises just 8.74% of the U.S. population, according to the U.S. Census. And apparently not enough for Bud Light, since the brand is now doubling down on its Texas marketing with a state-specific ad campaign -- its first-such campaign in any state.

Based on the Houston brewery currently being responsible for 87% of all Bud Light sold in the state, the tagline is “Brewed in Texas.”

Helmed by draftline, A-B’s in-house agency, with earned media support from 3PM.Weber Shandwick’s dedicated Anheuser-Busch group, the campaign showcases local rodeo, boxing and soccer stars Cooper Davis, Teofimo Lopez and Rodolfo Pizarro in :15 spots showing how they “go to great lengths” both in their sports and then in their beer-drinking.

The campaign, which also includes radio, out-of-home billboards, digital and sponsorship deals, comes six months after Bud Light launched “Texas Packs” containing custom cans paying tribute to the state. With the support of such Texas athletes as Dak Prescott, Mike Evans, Brandin Cooks and Lane Johnson, the brand at the time offered $5 off of initial Texas Pack orders made through Drizly.

Bud Light said that a “significant amount” of its total ad spend is going to Texas, but wouldn’t divulge percentages to Marketing Daily.

The brand cited IRI statistics showing that its share of Texas beer sales year-to-date as of mid-April was over 15%.