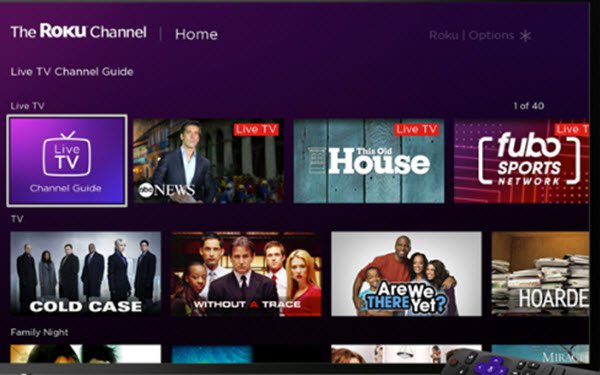 Through a deal with Warner Bros., The Roku Channel is now offering both the ad-supported and ad-free versions of Discovery+.

The channel receives revenue from advertising on its ample ad-supported content offerings, but had not to date offered a paid, ad-supported subscription option through premium subscriptions.

Roku already offers Discovery+ as a stand-alone app in its regular store.

The integration provides Discovery+ with access to an expanded universe of potential subscribers, while providing an additional selling point to attract and maintain subscribers for The Roku Channel.

Discovery+’s ad-free subscription is priced at $4.99 per month, compared to the ad-free tier’s $6.99 per month.

Discovery+ will add its 70,000 episodes of network shows along with more than 200 originals, making it the largest library on The Roku Channel.

The Roku Channel, which now reaches more than 80 million people, positions itself as a way for users to streamline access to the plethora of streaming choices now available, while paying a single monthly bill.

The app aggregates its own original content and licensed free content, together with the archives of other streaming services, and provides a hub for subscribing to and managing multiple paid streaming subscriptions and browsing their libraries.

The Roku Channel offers subs to more than 50 services, including Showtime, Starz, Epix, AMC Plus and Cinemax, but the largest streamers, including Netflix, Disney+ and HBO Max, have so far balked at the need to share a portion of subscriber and advertising revenue and user data.

The Discovery+ deal demonstrates that The Roku Channel can support multiple tiers and very large content libraries, and may help Roku make deals with other leading streamers with ad-supported tiers — particularly important now, given that both Disney+ and Netflix are in the process of adding ad-supported versions.

"Today marks an exciting milestone for our business as we welcome both tiers of discovery+ to the roster of exceptional services available as a Premium Subscription on The Roku Channel,” stated Randy Ahn, head of The Roku Channel, SVOD.

“We look forward to further extending the reach of our exceptional library of lifestyle and real-life content to millions of Roku streamers and providing them increased optionality in how they access discovery+,” added Gabriel Sauerhoff, senior vice president, digital distribution and commercial partnerships, Warner. Bros. Discovery.