What Facebook's Move To Meta Reveals About Rebranding

Facebook's Meta rebrand is being met with something much less than applause from consumers or industry, even months after the initial announcement. Comments on Meta range from, “Meh” to “Ridiculous!” depending on who you talk to.

To many, the reason for Facebook's rebrand seems obvious -- the company is tired of the bad publicity and wants to hide under a new name. Enter Meta.

Why even try to see things from Mark Zuckerberg's point of view? Just a month ago, Meta hired consulting firm Targeted Victory to turn the public away from TikTok.

Five months ago, multiple news organizations published a series of stories called “The Facebook Papers” yet again revealing how the platform is exploiting a number of populations. This follows the infamous Cambridge Analytica “fake news” scandal for the company, which Meta is still working to combat to this day. And now, Meta has reported its slowest revenue growth since the company's IPO.

Who wants to empathize with a monopolist who recently defended the policies of a platform that was filling us with poisonous lies, turning us against each other, and undermining our mental health?

Facebook changed our behavior, and not for the better, negatively affecting our relationships with ourselves and with others.

And then there is the name itself: Meta. It does not stop there, the company is changing the name of Facebook's “News Feed” to just “Feed”, and now, Facebookers will be "Metamates."

The audacity, gall, and pretension to name a company after a vague notion of the future of the entire industry -- the future of the web itself, then to keep going with it without any other tangible differences!

It was like planting a flag on a theoretical planet somewhere in Google Universe and starting to sell real estate. It gave people the vapors.

It is fair to say that, based on its reception thus far, Meta is failing in its new mission to not just make money, but to inspire.

And, yet, it merits consideration that the history of complex rebrandings is replete with unpopular and poorly understood starts. Trying to see these decisions from Zuckerberg's point of view can be an enlightening exercise.

Meta Goes Beyond the Name Change

First off, this is much more than a new brand name and architecture. Meta is part of a corporate cultural overhaul that includes a new vision, new mission, and new values that are far different from the old Facebook values.

Meta is going from “Be Bold” to six new corporate values: Move Fast, Focus on Long-Term Impact, Build Awesome Things, Live in the Future, Be Direct and Respect your Colleagues, and Meta, Metamates, Me.

The company is maintaining its disruptive themes in its branding, and taking it a step further. Now, Meta wants to be known for its collective success and creating a viable digital community.

It seems likely that Zuckerberg saw that the game Facebook had been playing -- one driven by growth, size, and category dominance above all else -- had reached the point of diminishing returns.

Being the place where everyone is leads inexorably to unwieldy, and unsustainable, size. Governments turn against monopolies. First you join. Then your mother and your grandmother join because you are there. Later, the next generation doesn't join because you are all there.

In response to slowing growth, Facebook tried to buy its continued dominance through WhatsApp, Oculus, and other acquisitions aimed at keeping the growth going and plug the leaks in the experience. But, as has happened to every monopoly ever, the advantages of size are giving way to the disadvantages of size.

Zuckerberg likely felt he had a choice. Run a mature, slow-growth business in the fast-growth world of tech and get the short end of the stick in the battle for top talent. Or find a new path to growth that could inspire top talent to commit to the company.

Meta is Not the First Big Tech Rebrand

Meta's rebrand is not that different from what Google did when its holding company was named Alphabet.

Both Meta and Alphabet are big tech companies with largely free consumer offerings. Both have a built-out, pre existing product prior to rebranding. And, of course, both have made plenty of deals to buy and collaborate with other companies to remain dominant.

Alphabet's rebranding is also little understood, but it matters less because Google dominates by answering our questions and helping us find the things we want to find, whereas Facebook dominates by trying to monopolize our time, by distracting us, and by competing with our sleep.

Where to Go From Here: The Importance of Behavior Change

As to whether the Meta rebrand will be revered or criticized in PR and marketing textbooks, my opinion is this -- Zuckerberg is right, the jig is up. Something needs to change.

While the launch of a new name is ham-fisted, and the awkwardness of the rebrand is not attractive, early ridicule can still be overcome by successful and consistent execution.

What we as marketing, advertising, PR, creative, and branding professionals can take away from Meta is that to really engage users and benefit from a rebrand, it needs to make sense from all vantage points. In the case with Meta, early ridicule can be overcome by successful and consistent execution.

However, none of this will work out for Meta if the company does not clean up its act with regard to its pervasive effect on our behavior. Our DiGo Brand Positivity Index, produced in partnership with Market Theory AI,  measures brand performance as it is impacted by behavior change.

As displayed in the chart below, Facebook's brand performance lags significantly behind other tech giants, including Alphabet, Amazon, Microsoft, and Apple. 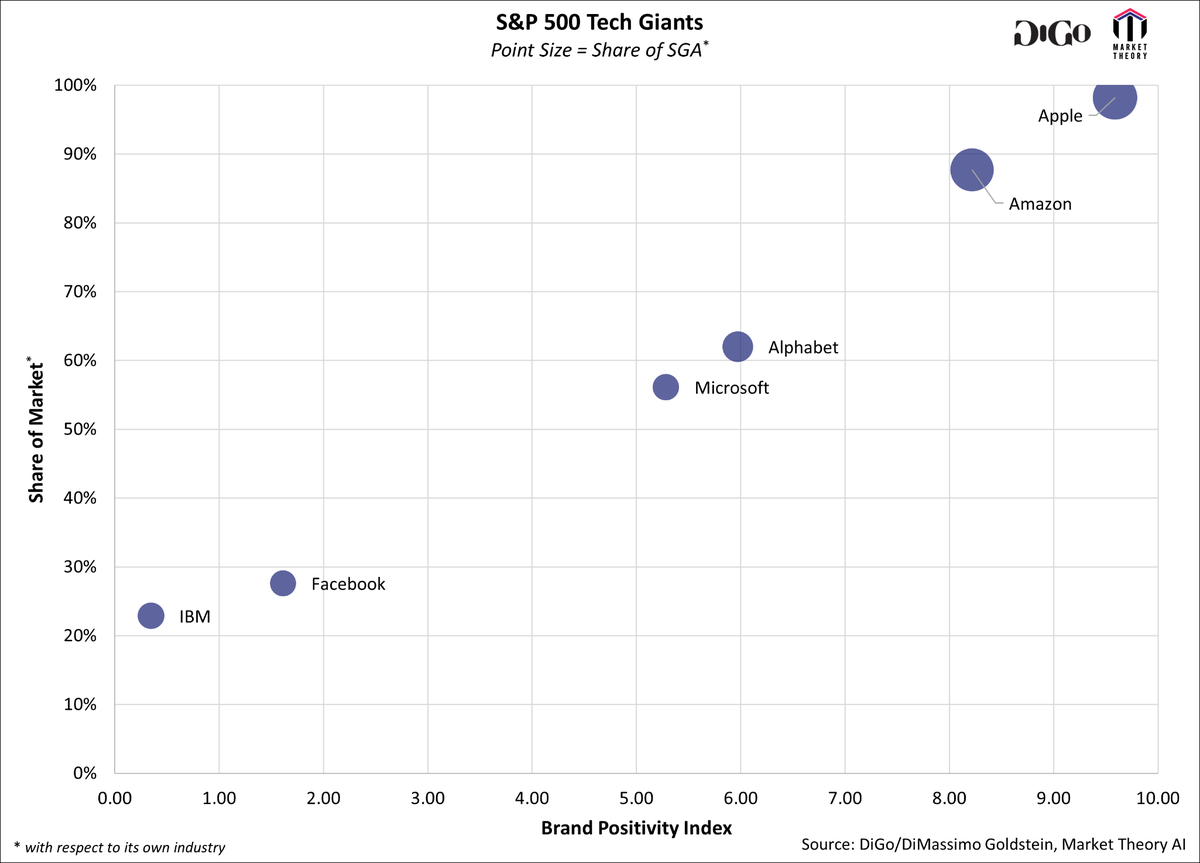 This means that Facebook has to spend more on marketing for the same market-share gains others achieve for much less.

This indicates that it's harder for Facebook to win and retain users than it is for competitors. This is due, our study suggests, to what people perceive about Facebook's effect on their behavior.

There are signs that the company is trying. New platforms open up advertising transparency, showing the ads and spending, including both commercial and political advertisers.

Facebook should institute a Positive Behavior Change Lab to maintain a clear-eyed view of its true effect on the lives of users, and to develop new ways of putting users in command of their time, moods, and lives.

If Meta can do that, people may one day name Meta as one of the most inspiring brands -- just as they now do Microsoft.

But, if history is any guide, they are unlikely to do that in this decade.