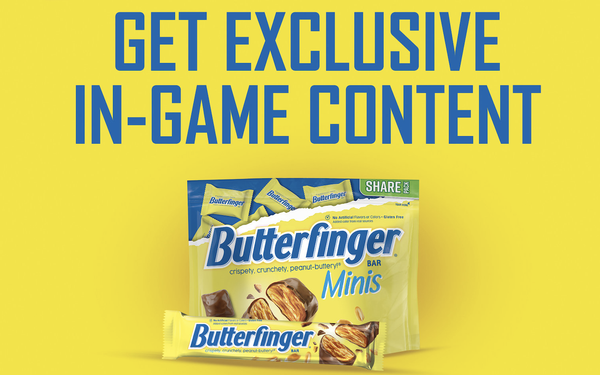 Who would want to go into battle without a candy bar for sustenance?

Certainly not players of one of the leading mobile videogames, PUBG Mobile, who can now access in-game Butterfinger-branded items like parachutes and buggies after purchasing the candy, which is marketed by Ferraro North America.

Players can get their in-game goodies through Aug. 31 by uploading receipts showing their purchases of at least two Butterfinger bars or one Fun Size Butterfinger bag.

They’ll also be entered into a sweepstakes, with two prize winners receiving a branded T-shirt, hat and pair of game controllers. That last item bumps each prize’s value up to $540.

PUBG Mobile, meanwhile, is offering a Butterfinger Login Challenge, in which players will receive in-game rewards daily for seven days. These items include supply crate coupons and mission cards.

Butterfinger, no novice in the gaming space, has previously partnered for content and experiences with such games as Final Fantasy VII Remake and Final Fantasy XIV and Halo Infinite.

During a live Twitch stream, Halo players were tasked with saving Halo's Master Chief from “Butterfinger isolation,” with influencers challenging viewers to post the highest score possible and the top scorers winning an Xbox console and Butterfinger-branded swag.

The brand, which will turn 100 years old next year, was purchased by Italy’s Ferraro Group from Nestle in 2018. Other owners of the venerable brand over its century have included Curtiss Candy, Standard Brands and Nabisco.