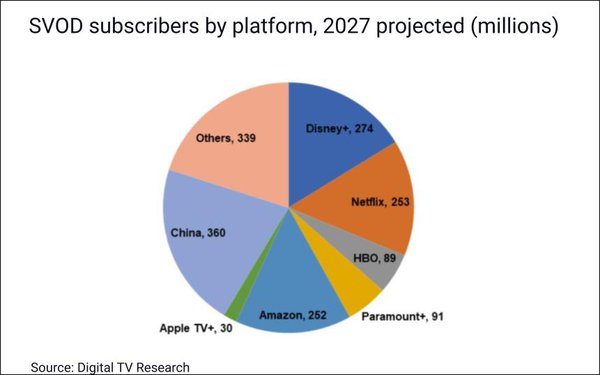 Netflix is expected to add 31 million subscribers globally between 2021 and 2027 despite losing 4 million in North America, according to the latest projections from Digital TV Research.

However, that 31 million gain — for an estimated 253 million total subs by 2027 — is 29 million fewer than the researcher projected just three months ago, in February.

Overall, the Global SVOD Forecasts report calls for global subscription video-on-demand (SVOD) paid subscribers to increase by 485 million, to reach 1.69 billion, between 2021 and 2027.

Disney+ is projected to surpass Netflix in 2025, and add 144 million subscribers by 2027, to reach 274 million. Disney+ Hotstar will roll out to 13 Asian countries by 2027, accounting for an estimated 114 million or 42% of the global Disney+ subscriber total.

Amazon Prime Video is expected to be just 1 billion behind Netflix by 2027, at 252 million. Meanwhile, Paramount+ is expected to surpass HBO Max/HBO, at 91 million to 89 million, respectively.

Netflix will remain the top revenue generator, with $34 billion projected by 2027.

That will be roughly equivalent to the combined projected revenues for Disney+, HBO and Paramount+. One factor: The lower-priced subscriptions in the Asian countries will generate $1.58 billion, or just 11%, of Disney+’s total projected global revenues of $14.7 billion in 2027, per the estimates.

However, the Netflix total is only $4 billion higher than its 2021 total, due to decelerating subscriber growth and anticipated pressure on its average revenue per user (ARPU).