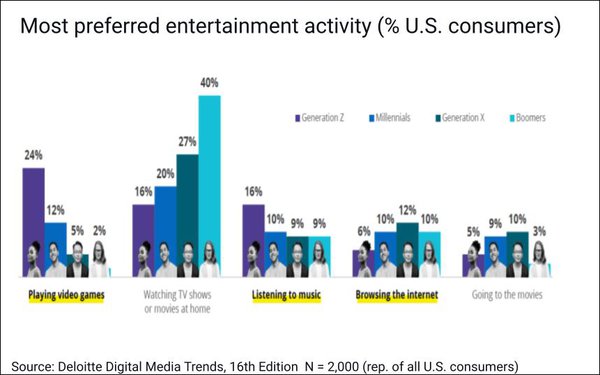 Netflix’s reporting its first decline in subscriptions — combined with its long-predicted surrender to launching an ad-supported tier — would alone mark this year’s first quarter as an inflection point for subscription video-on-demand (SVOD) and streaming in general.

But it’s part of a broader picture pointing to headwinds for streaming following its enormous growth during the first years of the COVID pandemic.

While streaming is still in growth mode, its momentum is slowing as a result of pandemic-weary consumers returning to experiential activities and growing competition from games, among other factors.

Case in point: U.S. subscription video-on-demand (SVOD) grew by 16.9% in this year’s first quarter (to $6.93 billion) — significantly down from the 27% growth enjoyed in 2021’s first quarter, according to a new analysis from Digital Entertainment Group (DEG) based on SVOD data from Omdia.

Disney+’s global subs exceeded growth expectations in Q1 (up 7.9 million versus expected 5 million), but average revenue per user for its North American subscriptions rose by only 15% in Q1, and Hulu’s revenue (not including Hulu+ Live TV) declined by 4% in its latest quarter.

Losses increased at both Disney+ and ESPN+ due to production costs and higher sports rights fees, respectively, and operating income declined at Hulu. Disney executives warned that the there might even be international subscriber declines in Q2.

And as we know, Disney, too, has now concluded that an ad-supported tier is necessary to drive sufficient growth for Disney+ and reach its 2024 profitability target. (Although it’s promising to keep ads to four minutes per hour.)

Not surprising, given that nearly 60% of U.S. consumers say they want to have lower-cost, ad-supported options, according to Deloitte’s latest Digital Media Trends report (released in March). 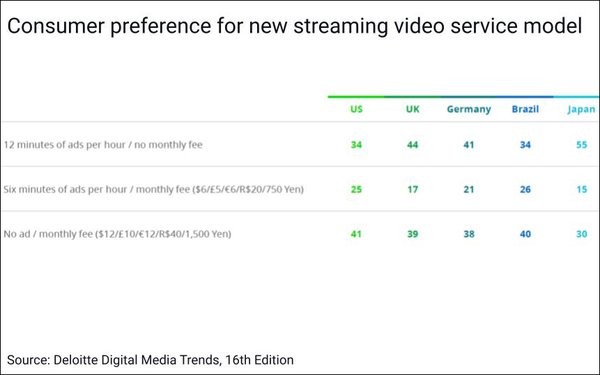 High percentages of U.S. consumers report frustration with various content issues and having to subscribe to multiple services to get the content they want, Deloitte’s survey showed.

It also found churn for paid video services averaging 37% across all age groups in the U.S. in 2021’s second half, and at 51% and 52% for Gen Z and Millennials, respectively.

As of last October, consumers reported having four SVODs, on average — down from 5.2 in 2020, though still above pre-pandemic levels, according to DEG.

Deloitte’s survey found access to original content and a broad range of content the most-cited reasons for subscribing (39% and 38%). About 30% chose “lack of new content” as a top reason for cancelling a subscription, while 41% chose “too expensive.”

Netflix and other services pumped up their investments in original content to make up for pandemic production limitations and companies clawing back their content rights to feed their own new streaming services.

But as the latest earnings reports showed, without the pandemic overdrive, limitless investment in content is not a viable business model. Even Netflix is taking a more skeptical, results-driven approach to its spending (not to mention leaping into the necessary but dangerous territory of charging to share passwords).

Meanwhile, DEG reports that experiential spending has returned to about 95% of its pre-pandemic level.

And Deloitte’s research shows that among Gen Z – key to the future of streaming — playing video games has surpassed watching TV shows and movies at home. (Chart top of page.)

“As the streaming industry matures, platforms are now grappling with a balancing act between subscriber retention and resource investment,” sums up Diesel Labs’ Q1 2022 Content Intelligence Report. “After years of steadily growing production budgets, Q1 earnings calls made it clear that we’ve hit the long-awaited inflection point. We’re likely to see budgets get right sized, which in some cases may mean shrink slightly from their current highs. The challenge will be to figure out how to cut back without compromising current levels of subscribership, viewership and engagement.”