Martha Stewart Downsizing? Everything Must Go! 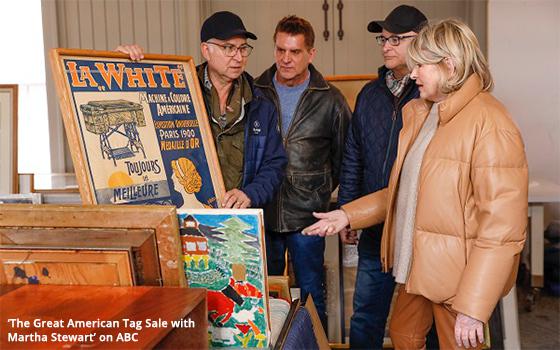 Martha Stewart has done TV shows from her Bedford, New York estate before -- but this week, voyeurs will get an up-close look like never before at the fabulous home and acquisitive life of America’s super-rich baroness of domesticity.

The occasion is the premiere of a new prime-time series on ABC titled “The Great American Tag Sale With Martha Stewart” in which she throws open the gates of her grounds for a tag sale of thousands of her own belongings.

And what belongings! This is not your neighbor’s yard sale. Instead, it is a sale of the best of everything -- antique furniture, hundreds of cooking items (all used by Martha at some time or another), sets of dining room chairs, all manner of decorative items, outdoor patio sets, paintings, untold numbers of dish sets, and the list goes on and on.

The first episode, premiering Wednesday night, sets the stage. The sale was held in March over at least two days. Curious shoppers had to buy tickets in advance for timed, one-hour visits.

In the introductory portion of Episode One, we quickly learn that this is no garden-variety flea market. Many of the items are price-tagged in the hundreds or even thousands of dollars.

Not that Martha Stewart is seeking to make a profit on her antiques and collectibles. Instead, all proceeds go to the Martha Stewart Center for Living at Mount Sinai Hospital in New York -- a facility that offers “high-quality primary care” to older adults (65+).

To prepare for the sale, Martha assembled a team of antique and auction experts who she has known for many years and an event planner and organizer with whom she is also acquainted.

The problem is, there is simply too much of it. In the show, Martha explains that her belongings have piled up on the Bedford estate because she recently sold another one of her mansions -- a home in East Hampton, New York -- and a good deal of the items stored in Bedford came from there.

She also says she recently moved out of a huge office in Manhattan that must have been oversized indeed, because items moved from there have also piled up in her storage barns. Basically, the problem now is that she has no more storage space.

If long-time viewers of TV’s hoarder shows are speculating that Martha Stewart has a similar problem, then they might be correct. She does appear to be a hoarder, but one with money -- like a cross between an ordinary hoarder and Charles Foster Kane.

First, there is one big difference between TV’s hopeless hoarders on the long-time shows seen on TLC and A&E and Martha Stewart. Her home has no clutter at all, and her storage facilities, while full, are wholly navigable, unlike the homes of TV’s hoarders.

In “The Great American Tag Sale,” we get a glimpse inside these storage buildings, where thousands of items are organized in plastic containers arranged carefully on shelves, while a canoe and a rowboat can be seen high above stored neatly on brackets hanging from the ceiling.

But Martha sometimes exhibits a trait common to the hoarders on the other shows -- she comes across items for sale and feels unable to part with them, even though she has a hundred other ones just like them.

This show is a “Lifestyles of the Rich and Famous” like none I can remember. While watching it, you wonder how much these thousands of items found in hundreds of antique shops and specialty stores around the world must have cost? And secondly, how do these rich people find the time to do all this shopping?

“The Great American Tag Sale With Martha Stewart” premieres on Wednesday (May 25) at 8 p.m. Eastern on ABC.