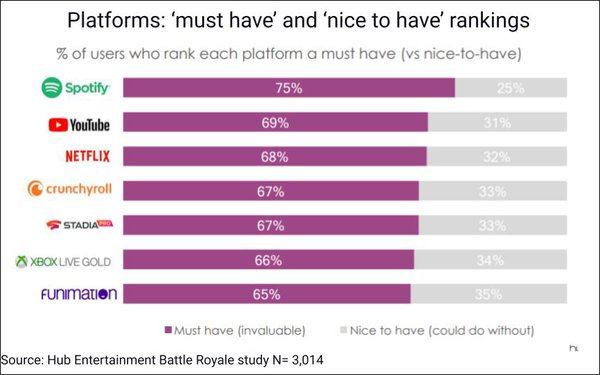 Only about half of the 12.5 entertainment platforms used by the average U.S. household are considered “must-haves” — and Spotify is the No. 1 must have, according to a new study from Hub Entertainment Research.

In a census-balanced survey of 3,014 U.S. consumers 18 to 74 who have broadband, fielded in March, 75% of Spotify users rated the audio platform as a must-have, versus 69% of YouTube users and 68% of Netflix users.

But Crunchyroll, Stadia, Xbox Live Gold and Funimation follow closely, with between 67% and 65% of users rating them as must-haves (chart above).

While special-interest platforms like Crunchyroll and Funimation don’t reach as many people as broader offerings, “by providing something there’s no simple substitute for, they’re perceived as invaluable to their users,” notes Mike Durange, senior consultant to Hub and a co-author of the study.

The average numbers of sources were found to be significantly higher than the overall 12.5 among consumers 18 to 34 (15.5 sources) and in households with children (16.4).

Consumers also gravitate to specific sources based on the situation and timeframe.

Social media rules at 30 minutes or under, while streaming dominates in timeframes of an hour or more. 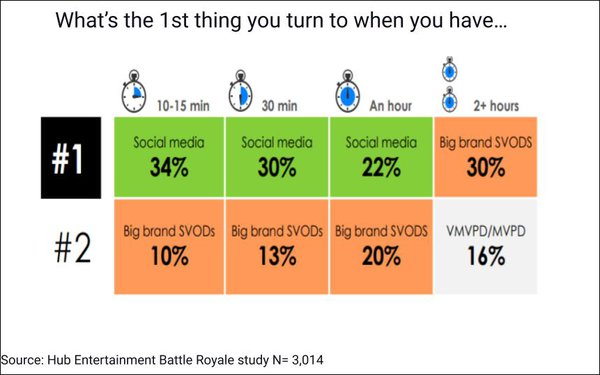 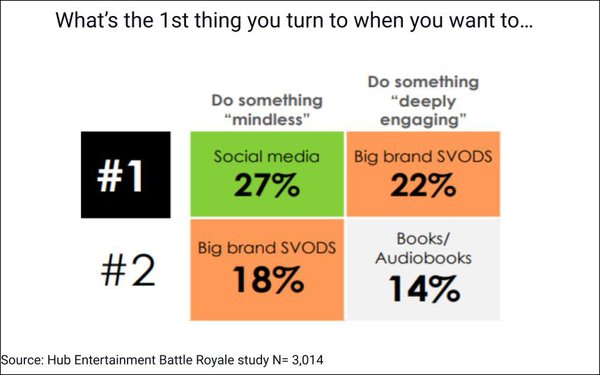 The survey also confirms the engagement and retention benefits of bunding content or services — and not just in the streaming arena.

Case in point: Among Amazon Prime subscribers who use Prime Video, under half (45%) say that Amazon’s entertainment content is a must-have. 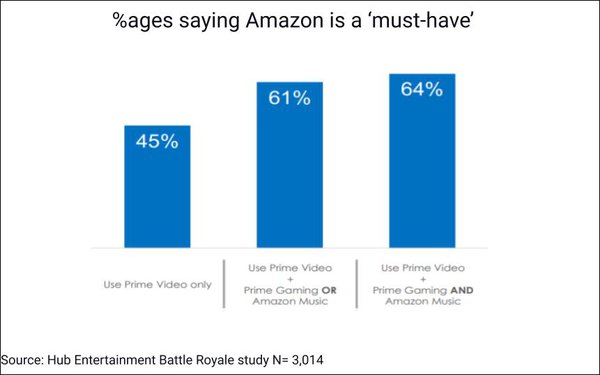 The study, dubbed “Battle Royale,” underscores the number and scope of platforms vying for consumers’ time and loyalty, “but it also proves that there are big opportunities for companies to engage consumers more deeply by leveraging IP across categories,” says Jon Giegengack, principal at Hub, also a co-author of the study.

“We’re already seeing this in action, whether it’s Netflix’s commitment to gaming or Halo’s success attracting viewers to Paramount+.  In the future, cross-category bundling may be a key tool to differentiate one provider from the many alternatives.”