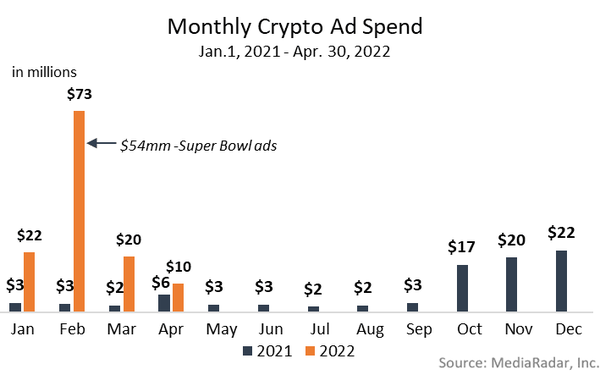 Over the past year, crypto has been anything but stable. At its peak, the crypto market in November of 2021 was valued at $3 trillion. It has since fallen to $1.3 trillion.

How has this plunge affected the world of crypto advertising?

To answer this question, advertising intelligence and sales enablement platform MediaRadar analyzed the advertising efforts of 200 crypto trading platforms and currencies between January 1, 2021 and April 30, 2022.

In U.S. dollars, this equates to $73 million, of which $54 million was spent in Super Bowl ads.

However, although they controlled the crypto advertising market, these four major brands decreased ad spend dramatically after their heavy investments in February. The market has seen a massive dip since its Super Bowl glory.

Coinbase’s March spend was down 98% from the previous month, and then adjusted its April spend down another 68% MoM.

Crypto.com decreased its ad spend 71% in March compared to February. In April, it reduced its spend another 68% MoM from March.

eToro’s March spend decreased 70% from its Super Bowl debut, with it remaining up 47% compared to January spend. In April the company saw a 41% MoM dip compared to March.

FTX’s ad spend in March was down 68% from February, but a 360% increase compared to January. The company then saw a 37% MoM decline in ad spending during April, as compared to March.

All other advertisers included in the report experienced a slight dip in ad spend at 3% MoM in March compared to February. In April, these advertisers saw a 42% MoM decline in spend.