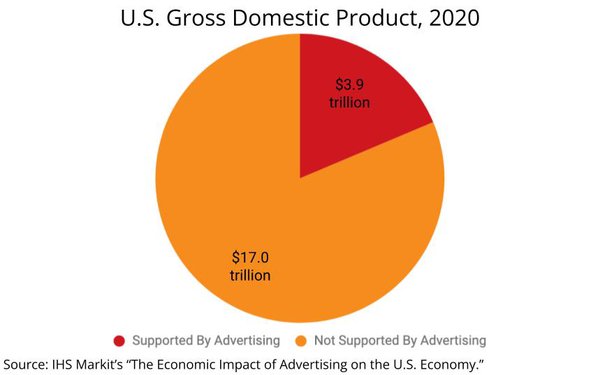 An economic analysis commissioned by a coalition of leading U.S ad trade organizations concludes that the combined direct and indirect effects of U.S. ad spending has a relatively minor impact on overall sales, and that the overwhelming majority happens without any advertising effect.

The analysis, which was released Wednesday by industry researcher IHS Markit, was commissioned by The Advertising Coalition, whose members include the Association of National Advertisers, the American Advertising Federation, the American Association of Advertising Agencies, the News Media Alliance, and the National Association of Broadcasters, utilizes economic models to tease how the percentage of sales directly attributable to ad spending (7.6%), as well as the gross sales including indirect effects of advertising (18.5%), but it does not actually make the case that any of it is incremental. In other words, that those sales would have occurred without any ad spending at all.

In fact, if you look at the inverse factor -- the 81.5%  U.S. sales not supported by advertising (both directly and indirectly) -- it begs a much bigger question about the economic impact of advertising.

So I asked it, and while executives of IHS Markit and/or the coalition were not available to answer it directly, a spokesperson said IHS Markit's analysts "did not explicitly delve into the incremental impacts of advertising."

But even if you assume that all of the sales "supported by advertising" were actually attributable to its effects, the overall conclusion of the study shows that advertising's impact is a relatively small percentage of total U.S. sales.

That's quite an indictment for an industry that boasts about "stimulating demand," though presumably, even if it wasn't incremental sales, they arguably were stimulated for the brands that invested in the advertising. Though in a marketing world increasingly being disrupted by direct-to-consumer products and services, even that case isn't made by this study.

Advertising has also been described as "the art of persuasion," but based on the findings of this report, I for one was not persuaded by its economic conclusions.

The Advertising Coalition was originally created to develop economic analysis on the value advertising contributes to the U.S. economy in order to stave off negative federal tax legislation, and it has published at least one similar study in the past.

Ironically, when I went to the coalition's website to look up what else it may have contributed, its link -- http://www.theadvertisingcoalition.com -- generated the result depicted below. 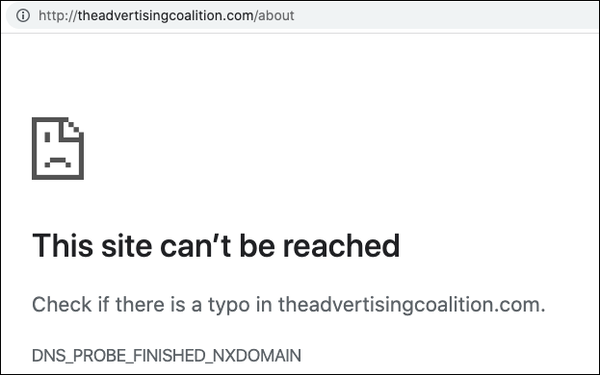