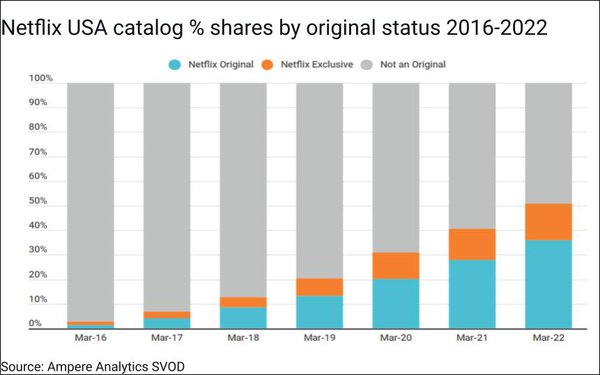 In March, for the first time, originals and exclusives accounted for more than half of all available content titles in Netflix’s U.S. catalog, according to Ampere Analytics' SVOD tracking data.

There are now more than 3,700 original- and exclusive-branded movies and TV seasons in the Netflix U.S. library, which has consistently offered about 7,000 titles over the past three years.

Under current growth rates, 75% of the movies and TV seasons available on Netflix will be either originals or exclusives by the end of 2024, according to the analysis.

The catalog's total content hours — currently 45% originals or exclusives — is forecast to cross the 50% threshold by the end of this year.

Among the major subscription video-on-demand (SVOD) platforms, Netflix is second only to the much smaller Apple TV+ in terms of its focus on original- and exclusive- branded content, and far ahead of fellow longstanding streaming incumbents Amazon Prime Video (9%) and Hulu (4%).

Netflix spent about $17 billion on all content (original and licensed) in both 2020 and 2021, according to IndieWire. Only Disney corporate, which is creating content for multiple platforms, to Netflix’s one, spent more on total content: $25 billion in 2021.

In terms of original content, Ampere’s Markets - Content data shows Netflix has outspent every other SVOD company each year since 2013 and has consistently increased its yearly spending. Netflix’s original content spend rose to $6.2 billion in 2021, more than double the next-highest spender — Disney+, with $2.8 billion.

Netflix has vowed to double down on quality in the wake of the fallout from its decline in subscriptions in Q1, but has not specified a content spending budget for 2022. With its stock down more than 70% in the past six months, management is requiring more focus on ensuring that all content investments will produce sufficient returns in attracting and maintaining subscribers.

The addition of an advertising-supported tier, expected late this year, will play into content investment and overall financial decisions.

But as Ampere points out, originals have been central to Netflix’s strategy for more than five years, and may be even more critical now that media companies are shrinking the pool of licensable content by keeping their studio content for their own streamers.

Back in September 2016, when originals and exclusives accounted for only 5% of its U.S. catalog, then-CFO David Wells set a target of an even split between original and licensed titles.

Ampere’s proprietary Popularity Score shows that across Q1 2022, Netflix originals and exclusives accounted, on average, for 12% of the 100 most popular titles available on SVOD in the U.S., the highest share of any SVOD platform.