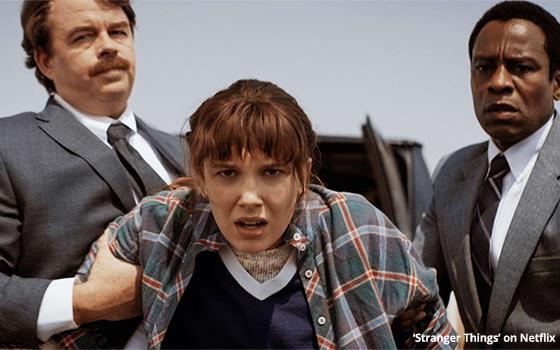 Netflix says global viewing for Season Four of its popular TV series “Stranger Things” posted a record total of 286.8 million hours viewed for the week of May 23 through May 29 -- dominating all Netflix TV content.

Strong returning interest in the “Stranger Things” TV series also got a boost from the show’s previous season -- all of which make it into Netflix’s top five globally viewed TV shows:

Season One of the show pulled in 38.1 million hours viewed, while Season Three had 24.3 million viewers and Season Two had 22.2 million.

In anticipation of the show's return, the premium streaming company spent around $1.1 million in national TV advertising spending over the last two weeks for 18 airings -- garnering 35 million impressions, according to iSpot.tv.

Much of the advertising effort was on ESPN, CBS, TNT, and NBC -- with many airings of its creative running on NBA Basketball, CBS’s “Survivor,” ESPN’s “SportsCenter,” and CBS’s “The Late Late Show with James Corden” and NBC’s “The Tonight Show with Jimmy Fallon.”