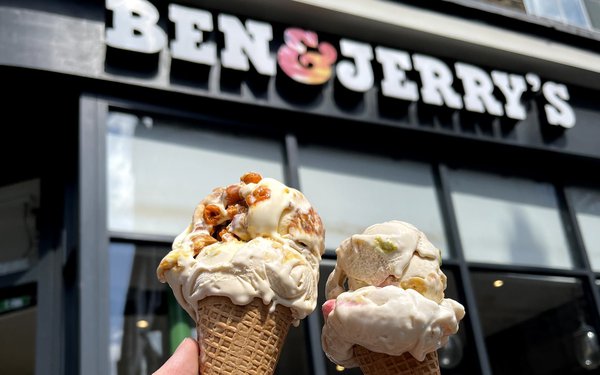 The restaurant industry is grappling with a persistent -- and occasionally paralyzing -- labor shortage. At-risk youth are facing perilous odds. Leave it to Ben & Jerry's to find a way to swirl the two together.

The Vermont iconoclasts are partnering with Unlock Potential, an employment program aimed at keeping young people out of jail, ultimately hoping to hire participants in its Ben & Jerry Scoop Shops.

The organization helps employers "advance racial equity, recruit the next generation of corporate leaders, and help disrupt the poverty-to-prison pipeline," it says in its release.

The program is small and will match prospective hires with a handful of Ben & Jerry's franchised Scoop Shops following a 12-month pilot program.

But the payoffs are potentially enormous. Unlock Potential, supported by Walmart.org Center for Racial Equity, aims to protect young people from the devastating economic consequences of going to jail.

Unlock Potential says that first-time incarceration decreases lifetime earnings by more than 30% and that it's worse for those in BIPOC communities.

And the impact of a criminal record has been shown to be 40% more damaging to Black Americans than those who are white.

The organization focuses on "disconnected youth," the 4.4 million young people between 16 to 24 who are both unemployed and not in school. And it further focuses on those with additional risk factors, such as foster care, the juvenile justice system or an incarcerated parent.

It's also adding racial justice into the content blender, including the launch of "Into the Mix," a podcast that blends art, activism, and culture.

Working with Vox Media, the podcast is hosted by author Ashley C. Ford and kicked off with singer-activist John Legend as the first guest. Other guests have included artist Favianna Rodriguez and Big Freedia, who first popularized New Orleans bounce music.

The regular podcast followed a six-episode series titled "Who We Are: A Chronicle of Racism in America," hosted by Jeffery Robinson, which earned a place on Apple's top 100 list of podcasts, as well as the top 10 history podcast list.