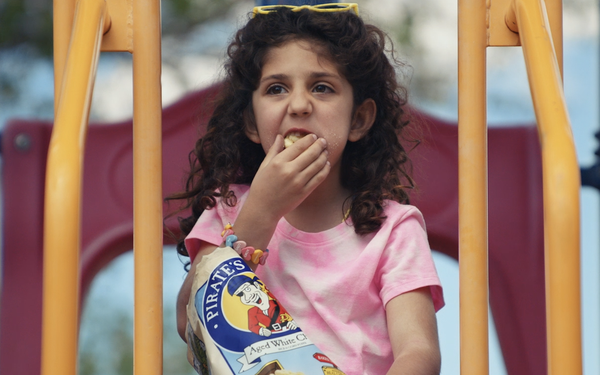 Unscripted kids take over for the iconic pirate mascot in a new campaign for Pirate’s Booty in which fun replaces the concept of non-guilty snacking.

A year ago, brand creative typically featured the pirate giving parents advice while touting a gluten- and artificial ingredient-free “better for you” snack whose origin is in the 1980s and was acquired by The Hershey Co in 2018.

“It was all centered around parent guilt and feeling better about buying it for your child,” Mark Chu, director of marketing at Hershey unit Amplify Brands, tells Marketing Daily. “We’ve shifted into a place of fun to create a different tone and feel.”

This positioning is conveyed in new spots from the 360i agency filmed at a playground in Los Angeles and featuring kids the agency suggested do unscripted dialogues.

“When I first saw the concept, I was very much on board from an authenticity standpoint,” says Chu. “But as we got into it I wanted to go back into my safe space—go to the shoot and get 10 reads of the exact same line, and kind of be done with that.”

However, the unscripted approach worked despite “ups and downs throughout the process.”

The new spots begin with a voiceover posing the question “How do the pirates make Pirate’s Booty so good?”

This boy sticks his face in a bag of Pirate’s Booty and declares “It smells good in here. Smells good.”

Less articulate is a girl who stuffs her mouth full of the rice-and-corn puffs and finally utters what sounds like “I don’t know.”

In what could be the most improv spot, a boy explains how Pirate’s Booty is made with “a thing” whose sound he then replicates. “And then they make it.”

As opposed to a short-term effort, the campaign is “the foundation for what we want to do over the next three years,” Chu adds.