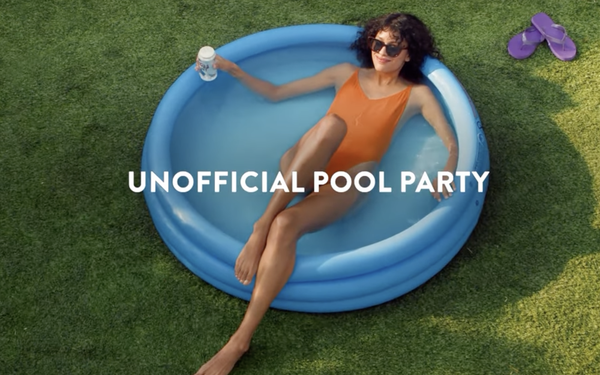 Like most major beer brands, Coors Light is the “official beer” of many sports teams and events. In the past, though, it’s also designated itself the official beer of everything from “drinking in the shower” to “being done wearing a bra.”

And now it’s “The Official Beer of Everything Unofficial” in a summer campaign targeted at 21- to 34-year-olds.

In commercials from the Mischief agency, the brand promotes such activities as “unofficial air conditioning” (a man cooling off as he reaches into a store’s refrigerated case for his beer), “unofficial seats until someone notices” (a couple grabbing first-row seats at a ball game) and “unofficial pool party” (a woman relaxing in a kiddie pool). And that’s all in the :15 TV version.

Both ads ends with Coors Light’s three-year-old slogan, “Made to Chill.”

Digital is running across ABC, Peacock, Hulu and other platforms.

Video production was by Caviar and Habitant.

The campaign also includes national out-of-home billboards and a QR code on each 12 oz can that “unlocks experiences, prizes and more.”

Coors Light, which along with Miller Lite, is one of Molson Coors’ flagship brands, saw its sales rise 4.4% last year.