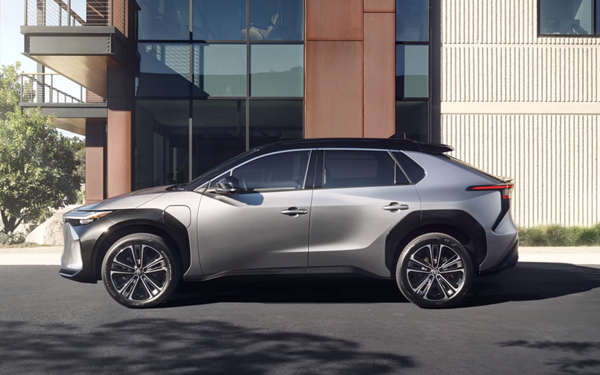 Toyota Motor North America will launch an education-first campaign for its new electric vehicle, the Toyota bZ4X, later this month.

The compact sport-utility vehicle, which will have a starting price of $42,000, was engineered with input from Subaru, which this summer is launching a rival model, the Solterra.

“Despite an awkward name and mixed reviews, the bZ4X could be the most consequential electric vehicle launched this year,” according to The Wall Street Journal, which says the vehicle finally gives the automaker a product to compete with Tesla.

Even Tripp’s father had to be convinced that hybrid vehicles -- those that have a traditional gas engine combined with an electric motor -- were nothing to be afraid of.

“He was driving it and he said ‘is this one of those hybrids?’ and I said ‘yeah,’ and my dad said ‘well I’m a traditionalist, I like what I know’ and I started explaining. He drives it for a week, and now he wants to trade in his gas-engined car for a hybrid.”

Consumers have anxiety around the charging process (when, where, how long) and whether an EV will require them to change their lifestyle, he adds.

“We are leaning into the consumer insights that we saw within EVs,” he says. “One is, ‘I’m intimidated, show me this is easy, show me I can understand this.’”

Some of the EVs in the marketplace today are a bit “counterintuitive,” he says.

“You jump into the cabin and it feels foreign,” Tripp says. “So the bZ4X is very much a Toyota when you get in. It has some advancements, but you’re not intimidated when you get into the cabin. And our campaign is going to really leverage the idea that Toyota makes owning an EV ‘Easy bZ.’”

Toyota’s dealer network is supported with feedback on how best to talk to consumers about EVs via an online platform and app called “Engage” that uses video-based content.

“We can teach them about all the ins and outs of the technology and vehicle specifics,” Tripp says. “We just put a whole educational content on there, where we used the analogy of water in a pipe to explain volts and charging and things like that.”