Budweiser Celebrates Best Buds In Baseball And Beyond 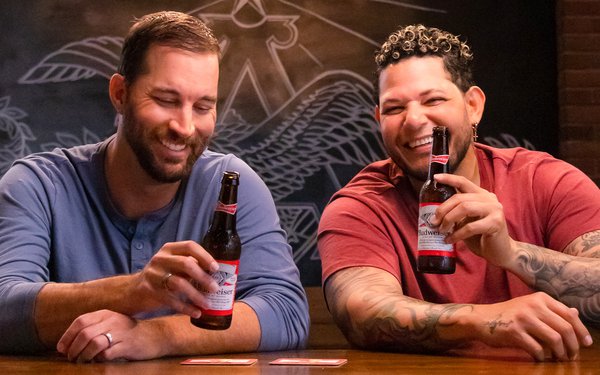 With National Best Friends Day coming up June 8, Anheuser-Busch’s Budweiser is celebrating Adam Wainwright and Yadier Molina, the longtime pitcher-catcher duo of its hometown Busch Stadium team, the St, Louis Cardinals, with a tribute video, sweepstakes and $5-off Drizly offer.

The 45-second video, which ends with the two players drinking Bud together, cites highlights of the duo’s 17 years together, including two World Series wins and 11 Golden Glove honors, plus “countless comebacks, thousands of unspoken words, millions of fans brought to their feet…but one stat rises above them all – 17 seasons as best buds.”

The creative was done by Anheuser-Busch’s in-house agency, draftLine.

Wainwright and Molina, currently in third place on the all-time list of games started by a pitcher-catcher combo (or battery), are expected to break the record set by Mickey Lolich and Bill Freehan of the 1963-1975 Detroit Tigers (324 games) later this season. The Cardinals duo now has 315 starts, just a game short of Warren Spahn and Del Crandall of the 1949-1963 Boston and Milwaukee Braves.

Last month, Wainwright and Molina broke Spahn-Crandall’s record of 202 wins by a battery.

The video is running starting today on Budweiser’s social channels, inside Busch Stadium and on TV during Cardinals games.

In addition, Budweiser is offering $5 off the next round of Budweiser bought on Drizly and launching a “Best Buds” sweepstakes. To enter the latter, consumers 21+ must tag a friend using #BestBuds and #Sweepstakes in Budweiser’s social media comments.

Busch Stadium, incidentally, wasn’t named for Busch Beer, which didn’t even exist when the park’s first location was named in 1953. Anheuser-Busch, which then owned the Cardinals, wanted to name the facility… yes,Budweiser Stadium, but Major League Baseball wouldn't allow a ballpark to be named for a beer, so it was christened instead in honor of company president August Busch Jr.

A-B then launched Busch Beer the following year. Even today, with multiple MLB ballparks named after brands, only one other stadium sports a beer’s name: Coors Field in Denver.