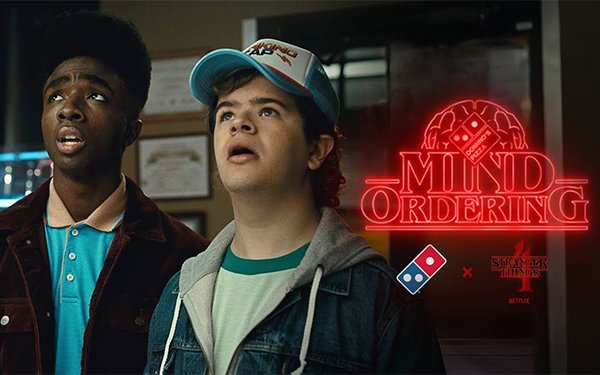 Netflix has ramped up its advertising efforts and is seeing strong impression results -- including from its co-branded partners such as Domino's -- for the new season of "Stranger Things."

Domino's has placed an estimated $3.7 million in national TV advertising spend -- coming from 1,960 airings in a co-promotion deal with Netflix's “Stranger Things” from creative executions, according to iSpot.tv (for the period from May 16 through June 6th).

It has produced a total of 416 million impressions in order to cross-promote Domino's special “mind ordering app” -- which uses facial recognition and eye-tracking technology to allow test subjects to use their "powers" to order pizza.

Netflix has spent $1.3 million for 25 airings, resulting in 53.4 million impressions of its own for advertising on ESPN, NBC, TNT, CBS, and ABC for program content including NBA Basketball, “America's Got Talent”, “Survivor”, “SportsCenter”, and “The Tonight Show Starring Jimmy Fallon.”

Promotion place-based activations for the show include a “Stranger Things: The Experience,” an immersive, interactive exhibit in New York and San Francisco, and, for August, one in London.

Netflix says global viewing for season four of its popular TV series “Stranger Things” posted a record total of 286.8 million hours viewed for the week of May 23 through May 29.

The show now holds the record for best Netflix TV series opening, topping season two of “Bridgerton,” which pulled in 193 million hours for its opening weekend in March.