United States Is The Most Data-Breached Country 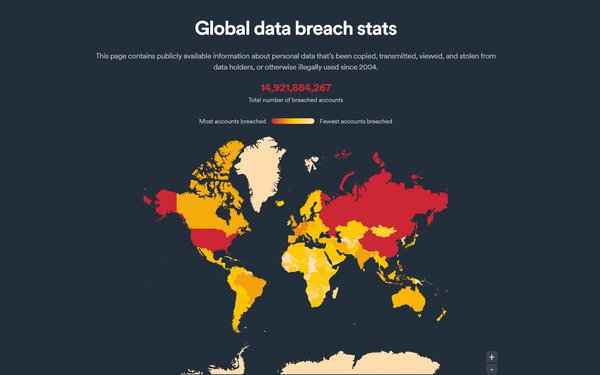 Cybersecurity company Surfshark on Tuesday released findings compiled from 18-years of data that suggests the United States is the most data-breached country globally.

It seems mind-boggling when considering that each U.S. internet user since 2004 has lost 27 pieces of data on average to online breaches -- most of them emails, passwords and usernames.

An analysis of 15 billion data points found that more than two-thirds of accounts in the United States are leaked with the password, putting breached users in danger of account take over, according to Surfshark.

The data points include 8.7 billion last names, first names, internet protocol addresses, passwords, usernames, and other data has been sold or leaked online since 2004.

An analysis of 15 billion data points found more than two-thirds of accounts in the U.S. are leaked with the password, putting breached users in danger of account takeovers, according to Surfshark.

In fact, the United States and Russia account for 30% of the total breaches worldwide since 2004. The U.S. breached accounts account for 15.4% of all breached email addresses globally, and leaked Russian email account make up 14.6% of the total global breaches, according to the data.

Since the start of 2020, 2.2 billion accounts have been breached worldwide -- not just email. This accounts for 15.1% of the total global breaches that have occurred since 2004, accounting for 12 out of 100 people globally annually.

On a positive note, the trend in the U.S. is the opposite. The breach rate in the U.S. fell 33%, when compared with the year-ago quarter. The data shows breached rated fell from 18 to 12 accounts per minute.