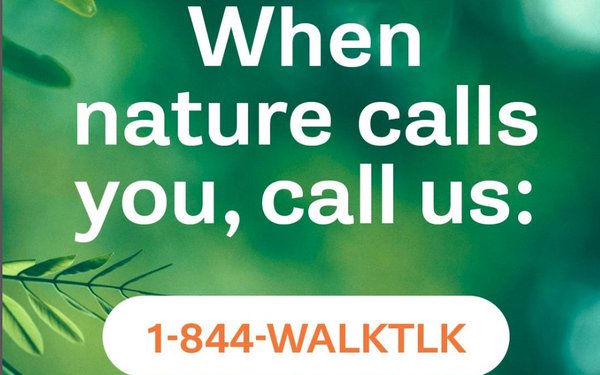 Ever hit the hiking trail on your own and think, “This would be better if I had some company”?

If you have, Merrell’s got your number. Literally, your toll-free phone number. The outdoor footwear brand is operating a “Walk and Talk Hotline” throughout June to celebrate Great Outdoors Month.

The campaign is a follow-up to last year’s efforts, called “Everything is greater outdoors,” which involved many in-person events.

“This year, we wanted to expand that idea to more people,” says Jenny Bernsteen, brand equity marketing manager. “Everyone has a phone. And we know our audience loves to walk. We wanted to give them a fun new way to get outside -- and have someone keep them company.”

Callers reach one of Merrell’s real live outdoor reps, who explains the options. They can ask for a guided meditation on walking mindfully or an outdoor-themed dad joke. (Q. Why do I like mushrooms? A. Because I’m a fun guy.)

There’s also an ultra-detailed tutorial on applying sunscreen and outdoor motivations to brighten their walk. They can also choose “Transporting yourself to Aspen,” which provides various nature sounds.

Callers get a promotion code, earning them $10 off purchases at Merrell.com.

Ads for the effort are running on digital and social media, with an out-of-home campaign appearing in Chicago and New York.

Merrell, owned by Wolverine World Wide, did research heading into the campaign. Among a sample of adults 18 to 44, 93% go on a walk at least once a week, spending at least 15 minutes outdoors. And 78% talk on the phone while they’re walking.

Some 36% listen to music, a podcast or audiobook while walking. Bernsteen does, too, “but that’s kind of one-way communication. It’s not the same as talking to someone.”

Merrell worked with Havas on the campaign and is watching engagement metrics.

“Obviously, we love to sell shoes,” Bernsteen says. “But the first goal is to reach as many people as possible, bring a new take on the walk and drive forward the sentiment that everything is greater outdoors.”