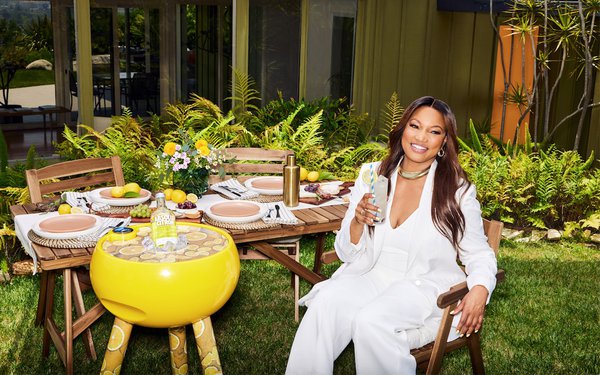 Last summer, Absolut was encouraging pandemic-weary drinkers to mix responsibly with each other. Now, the brand just wants everybody to mix it up.

Just a day after announcing “The World of Absolut Cocktails. Born to Mix,” said to be its largest campaign in over a decade, the Pernot Ricard brand has launched the Front Yard Citrus Club, “a way to meet your new neighbors and reconnect with old ones, by mixing it up.”

The Club -- which keys off of Absolut’s Citron, Lime, Mandrin and Grapefruit flavored vodkas -- is a partnership with actress/author Garcelle Beauvais, who’s also been named its “social director.”

In addition to a host of frontyard entertainment tips from Beauvais, the Club offers a line of four citrus-colored coolers ($174 each) produced by Outside Gang as well as a cocktail kit ($215 from ReserveBar) that includes choice of cooler, one bottle of the related Absolut flavor, cocktail ingredients, recipe cards, and a copy of Beauvais’ new book, “Love Me As I Am.”

The campaign, with creative from Ogilvy and media from Wavemaker, has launched with  out-of-home ads in Miami, New York City, San Francisco and Los Angeles, digital films, social media (Facebook, Instagram, Pinterest, Snapchat, Twitter), a :15 spot on linear TV, and a :30 spot on connected TV.

The first commercial introduces “Bloody Mary,” described as “sweet and spicy…trustworthy and everyone’s friend, but doesn’t try too hard.” She mingles first with Cosmo, “chic and charming… a tastemaker, chic and composed with a flair for art” and then with Espresso Martini, “strong and spirited…. a lively, attention-grabbing trendsetter.”

In a hint of things to come in future ads, Screwdriver, Madras and other characters make cameo appearances in the longform spot.

Oscar and Emmy winner Rami Malek (“Bohemian Rhapsody,” “Mr. Robot”) narrates: “Welcome to the Absolut world of cocktails.  In this exclusive, yet inclusive, world, everything is mixed – expression, personalities, friendship. The more we mingle, the more we create, the stronger we become.”

The spot is directed by Rodrigo Saavedra, known for his music videos for artists like DJ Snake & Selena Gomez music vide

Following its current launch in the U.S., the campaign -- planned as a multiyear effort -- will move into Canada and then globally.