Dancing? Enjoying Nature? 'It's All Yoga' At Kripalu Center 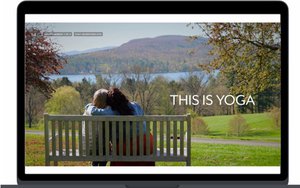 Perhaps yoga will help. Or in the case of Kripalu Center for Yoga & Health’s new 50th anniversary brand campaign, everything from enjoying nature to connecting with others, now grouped under the wide banner of “It’s All Yoga.”

The nonprofit aims to show that “yoga is more than just poses on a mat but a way of life,” Tracy Williams, senior director of marketing, tells Marketing Daily.

With creative handled in-house and media planning and buying from BrandCottage, “It’s All Yoga” builds on Kripalu’s transformation during the darkest days of the pandemic from a temporally closed retreat based in Massachusetts’ Berkshire mountains to a destination that now features live and on-demand online activities.

Hence, while previous Kripalu campaigns focused on regional Northeast print and radio buys to drive people to the retreat, the new effort also targets a national audience with :15 and :30 videosvia ads on Hulu, nytimes.com, BostonGlobe.com, USAToday.com and paid social media. The campaign will run through mid-July.

There’s still a regional focus, but now, Williams says, the Center is particularly targeting urban dwellers in California as well as the Northeast. Paid national advertising on Facebook and Instagram, meanwhile, supports both online and on campus programs, she says.

Kripalu’s demographic target has shifted somewhat, too. While the campaign still mainly seeks to reach “college-educated adults, ages 30-50 with interests in health and wellness,” Kripalu also wants “to build awareness …among a Millennial/Gen-X target audience,” according to Williams.

“Since bringing many of our programs online in 2020, we have been able to reach a broader demographic and have seen a 16% increase in new visitors that have never been to our Kripalu campus,” she notes.

In the :30 spot, an onscreen graphic reads “This Is Yoga” while a woman strolls on a peaceful outdoors trail. Next, the ad shows people dancing and then a woman getting a massage, a couple enjoying mountain scenery from a bench, and finally a yoga class. At that point, a new graphic appears: “It’s All Yoga.”

The :30 is similar, leaving out the dancing and massage, and using the line, “Yoga nourishes body, mind and spirit” as the yoga class is shown.

“Kripalu’s mission to ignite personal and societal transformation through the power of yoga is more relevant than ever in the challenging times we are living in,” says Williams. “Since the center's reopening in August 2021, our visitors have expressed their gratitude to Kripalu for providing a safe place to reclaim their personal strength.”

Simultaneously, she adds, since putting yoga luminaries, thought leaders and wellness experts online, the Center has been able to “promote accessibility and geographic reach of Kripalu’s services globally…. Today, we are reaching people across the entire U.S. and 50+ countries.”