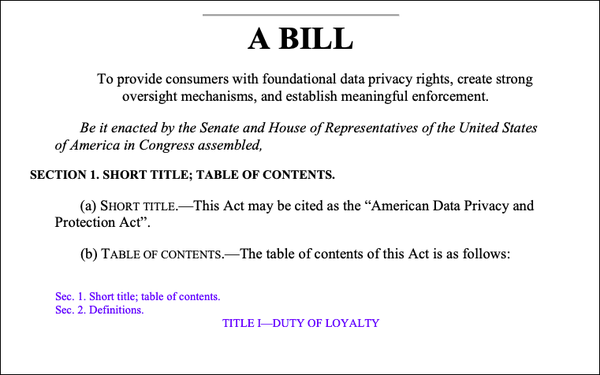 The ad industry is weighing in against a bipartisan privacy proposal that would prohibit companies from tracking consumers online without their opt-in consent.

“It's going to have huge negative implications on the whole internet economic model -- which will be bad for consumers and bad for businesses,” Venable attorney Stuart Ingis, advisor to the industry coalition Privacy for America, tells MediaPost.

Significantly, the draft bill would require companies to obtain consumers' opt-in consent to collect a broad range of data -- including information that has long been considered sensitive (financial account numbers and the like) as well as information the industry doesn't consider especially sensitive (such as pseudonymized data about web browsing and video viewing).

What's more, the bill would allow consumers to opt out of receiving targeted ads -- even if those same consumers previously opted in to tracking.

For instance, someone who downloads a browser extension that offers discounts, and consents to tracking in order to use that service, could then opt out of receiving ads targeted based on the data collected via the extension.

Ingis argues that the provisions regarding tracking are too restrictive.

“The use of pseudonymized clickstream data to provide advertisements to consumers of products they might be interested in is a good thing,” he says.

“I don't think the bill as written is fixable,” he adds.

Some advocacy groups, on the other hand, are expressing at least some support for the bill.

“While it’s not perfect, the draft is a hopeful first step,” Center for Democracy & Technology CEO Alexandra Reeve Givens stated soon after the 64-page discussion draft was unveiled.

The bill has numerous other provisions, including one that would prohibit companies from knowingly serving targeted ads to anyone under 17.

The proposed federal law would override many state privacy laws, but not all. Among the state laws that would remain in force is the Illinois biometric privacy act, which allows state residents to sue companies for up to $5,000 for compiling faceprints.

Senator Maria Cantwell (D-Washington) hasn't yet signed on to the bill, and it's not yet clear whether the Senate will take up the proposed measure this month.

But lawmakers in the House are moving forward. On Tuesday, the House Energy and Commerce Committee will hold a hearing on the draft bill.