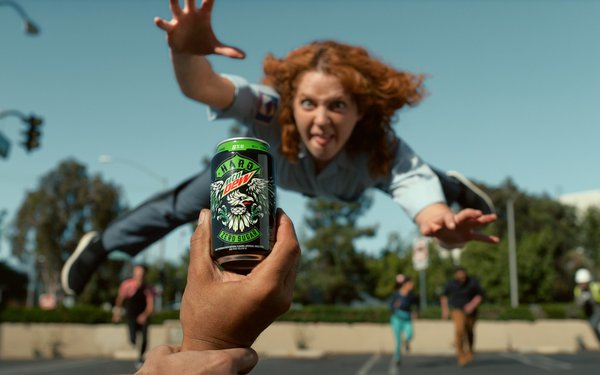 Folks are going to great lengths -- or possibly freaking out -- to get their hands on Hard Mtn Dew in the first-ever ad campaign for the new alcoholic soft drink spinoff from PepsiCo and The Boston Beer Company.

In three :06 spots from PepsiCo’s In-House Content Studio that show a continuing story, a woman first makes a flying leap for the drink, joining a group of guys; another guy with a bag of groceries slides into the group  as they grapple for the can; and finally, he’s tackled by a hard-hatted worker who then emerges with the prize.

In two other :06 spots, a businessman runs through a pane of glass to get Hard Mtn Dew and then a woman with a yoga mat drops down on top of him to battle for it.

Each spot has the same voiceover: “New Hard Mountain Dew is finally here. With five percent alcohol. Freak out responsibly.”

There’s also a :15 spot containing elements of the shorter spots.

The ads convey the enthusiasm that consumers have shown toward Hard Mtn Dew since it began rolling out in February, according to Boston Beer’s Kelli McCusker, the brand’s head of marketing.

“Fans were, and still are, authentically excited to get their hands on a can,” she tells Marketing Daily. Upon its launch, she notes, “the brand trended on Twitter for several days, and we saw a notable uptick in mentions of Hard Mtn Dew across traditional and social media.”

Since then, Arkansas, Oklahoma, Minnesota and, this week, Missouri, have joined the list.

The rollout is happening state by state since PepsiCo rather than Boston Beer is handling distribution, and the former’s brand-new entity for that purpose – Blue Cloud Distribution -- is still in the process of getting state-by-state regulatory approval to distribute alcohol.  Boston Beer, meanwhile, produces the beverage and leads marketing efforts.

The new campaign, which launches today, will run in the current seven states on streaming, digital and social media, including Hulu, Spotify, YouTube, Facebook, Instagram, Snapchat and Twitter. As Hard Mtn Dew expands into other states, the campaign will follow, the brand said.

In addition to its 5% alcohol content, Hard Mtn Dew is sugar- and caffeine-free and comes in four flavors: regular, black cherry, watermelon and Baja blast.