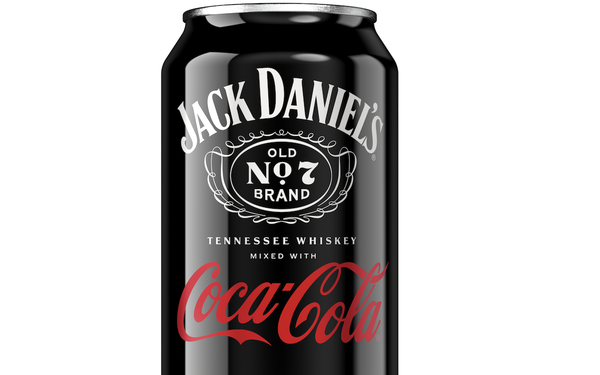 Last summer, when PepsiCo first announced the coming of Hard Mtn Dew, some entertained the possibility that rival Coca-Cola would soon introduce a canned Rum & Coke.

That hasn’t happened yet, but Monday morning, as Hard Mtn Dew rolled out its first ad campaign, Coca-Cola teamed up with Brown-Forman to announce the upcoming launch of another famed cocktail: Jack and Coke.

The companies said the RTD beverage, which combines Coke with Brown-Forman’s Jack Daniel’s Tennessee Whiskey, will launch first in Mexico late this year.

The news comes just days after Brown-Forman reported sales gains of 23%, led by Jack Daniel’s Tennessee Whiskey at the same rate, during its fiscal year that ended April 30.  The growth was attributed largely to pandemic restrictions affecting on-premise drinking the previous year.

One week ago marked the launch of Simply Spiked Lemonade, in association with Molson Coors. Available in four flavors -- regular, strawberry, blueberry and watermelon -- the brand tells Marketing Daily that the launch will be supported with an ad campaign coming later this month.

Coca-Cola and Molson Coors are also responsible for Topo Chico Hard Seltzer, which has been a major success since its regional launch in 2021. It went national in January with a national ad campaign using TV, online video, podcasts, paid and organic social media, and social influencer marketing.

In announcing Jack and Coke, both Coca-Cola and Brown-Forman touted the iconic nature of their brands.

“This relationship brings together two classic American icons to deliver consumers a taste experience they love in a way that is consistent, convenient, and portable,” said Lawson Whiting, Brown-Forman chief executive officer and president, in a statement.

“We keep consumers at the center of everything we do as we continue to develop our portfolio as a total beverage company, and that includes new products with our iconic Coca-Cola brand,” said Coca-Cola chairman and CEO James Quincey.

As Coca-Cola moves into the alocholic space formerly occupied just by companies like Brown-Forman, though, its ambitious moves are attracting the attention of industry watchdogs.

Nonprofit Alcohol Justice last month placed Coke in its “doghouse,” with research director Carson Benowitz Fredericks stating, "The ease with which Coca-Cola has jumped-in to become Big Alcohol's newest gorilla should terrify us. They know how to get away with selling lethal products, they know how to make the youngest kids drink their drinks, and they know how to extort a legislature.”

Writing while Coca-Cola just had three alcoholic products in its portfolio, the group said the products “take cues from the worst trends in flavored malt beverage production. All three are cross-branded with familiar, non-alcoholic products. All three hide under the veneer of ‘healthy’ alcohol. And all three are the kinds of flavor-masked products that frequently serve as the drink of choice for youth who still dislike the taste of alcohol.”