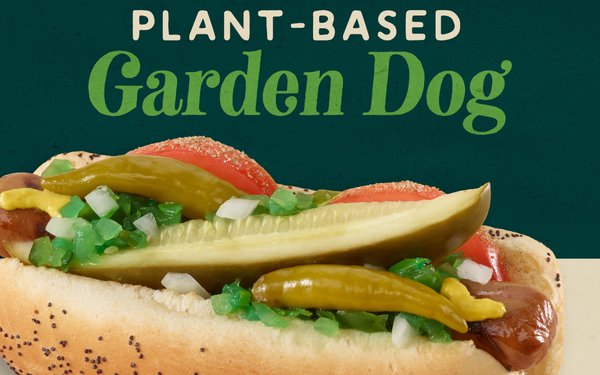 Based on early sales of QSR chain Portillo’s plant-based Garden Dog hot dog, it is possible to teach an old dog new tricks.

Last month, the 59-year-old Portillo’s, which started as a single hot dog cart in Chicago, launched Garden Dog in partnership with Greenleaf Foods’ Field Roast brand at all 71 of its U.S. locations.

He said that more than 60 Garden Dogs were being sold at each restaurant every day, “which is pretty darned good.”

Advertising for the Garden Dog focuses primarily on taste, as in this spot featuring customers who were the first to experience the pea-based meat substitute.

According to Osanloo, staffers at Portillo’s had pitched him different plant-based options “honestly, for over three years. The first few were just disgusting. Then there’s some that don’t taste bad but you read the nutritionals and you’re like ‘this is worse than meat. this is horrible.’”

Garden Dogs are billed as offering the same amount of protein per serving as most traditional hot dogs but with less sodium and no nitrites or genetically modified organisms.

When Portilllo’s began collaborating with Field Roast, “The first time I tasted it I said ‘no.’ The second time I said ‘you’re close.’”

The final version was tested “in a handful of restaurants and got ridiculously positive consumer feedback.”

Another factor in offering a plant-based food is that by providing something for non-meat eaters, the chain can “cancel the veto” of people who would not consider dining at Portillo’s.

Best known for such menu items as Chicago-style hot dogs and sausages, Italian beef sandwiches and crinkle-cut French fries, Portillo’s recently opened its first drive-through-only location in Illinois—where 45 of its restaurants are located. The rest are currently in other Midwest locales such as Indianapolis, along with Phoenix, Tampa and Orlando, and southern California.

The company plans to expand its footprint by 10% per year.

“I suspect that Portillo’s—some time in the not-too-distant future—is going to be spoken of terms of In-N-Out Burger and, knock wood, Chick-fil-A,” said Osanloo.