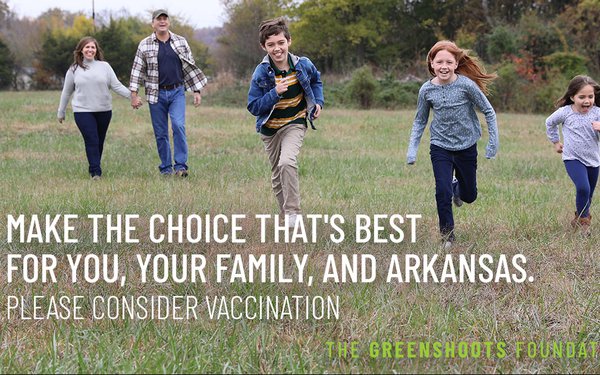 A recent analysis by The Daily Yonder, an online news publication covering rural America, found that only 51% of rural populations were completely vaccinated against COVID-19 as of the end of May, versus 65.4% of metro populations.

Yet since the start of the pandemic,the death rate from COVID-19 is 35% higher in rural areas than in metro areas, the publication reported.

Helping to break through this disconnect is The Greenshoots Foundation, a new Arkansas-based nonprofit armed with an ad campaign created by the Definition 6 (D6) agency. The tagline at the end of all ads is “Please Consider Vaccination.”

The campaign’s linchpin is a TV PSA showing a father overcoming vaccine hesitancy during a one-minute trip passing lots of children and one graveyard sporting American flags. The ending graphic reads, "Life. Your Journey. Your Choice.”

The spot has also been part of paid media buys from D6.

The PSA portion of the campaign -- which includes radio -- launched in Arkansas rural communities last November and was so successful that it expanded in March to rural areas in 18 other states (Mississippi, Tennessee, Missouri, Oklahoma, Montana, Maryland, Wisconsin, Idaho, West Virginia, Ohio, South Carolina, Alaska, Michigan, Wyoming, Illinois, Tennessee, Utah, and Kentucky). To date, TV and radio broadcasters in those states have played the PSAs more than 103,000 times, with an estimated value of over $3.53 million in donated time.

GreenShoots said that its initial Arkansas effort correlated with an uptick in vaccination rates in communities that received the heaviest PSA play.

Specifically, in the first three months of the campaign, Arkansas counties with access to the PSA campaign saw increases in vaccination rates -- 9% in Pulaski County, for instance -- while vaccination rates in rural counties in neighboring Mississippi and Oklahoma actually dropped.

To date, Arkansas TV and radio broadcasters have played the PSAs 7,301 times, with an estimated value of $185,305 in donated time.

But the greatest exposure in the state came from paid media buys “deployed to ensure the PSA received the broadest prime-time airplay, including [to] audiences that lean conservative," Ted Huffman, GreenShoots co-founder, told Marketing Daily.  These buys, generating 4.1 million impressions, were made on Fox News, notably during “Tucker Carlson Tonight,” and on local broadcasts of major college football games.

GreenShoots also bought 19 billboards in rural Arkansas, yielding more than 16 million impressions. The boards used still photography from the TV shoot and lines like “For Your Kids. For Your Community. For Arkansas.”

Still photos from the shoot are also being used on social media. One of several ads shows the dad holding his young daughter, with the line, “Do It For Her.”