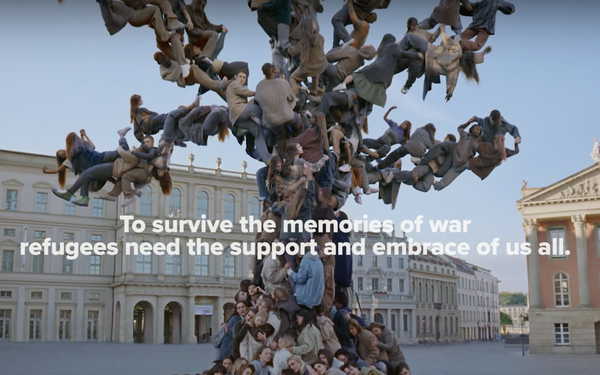 While most of us have been away from the gunfire currently endemic in Ukraine, a new PSA from UNCHR, the UN Refugee Agency, attempts to bring home the current reality of living in Ukraine during wartime.

The short film begins with a woman in bed awakened when her door slams and she hears gunfire. The woman then runs outside and begins crying. Next, the camera focuses on a man in a convenience store. We see him reading some texts while a fire truck goes by, the man hears a siren, and then tells the worker at the store to hide.

The camera then segues to a woman who is watching fireworks from the window of a train.  She then ducks down with her daughter, crying. Then the pair head to the streets.

In the last scene, we see where all the previous people have been running: It’s a city square among some buildings. A crowd of people then assemble into the shape of a tree. A caption reads, “To survive the memories of war, refugees need the support and embrace of us all.”