McKinsey Values Metaverse At $5T Economy By 2030, As Much As $206B From Advertising 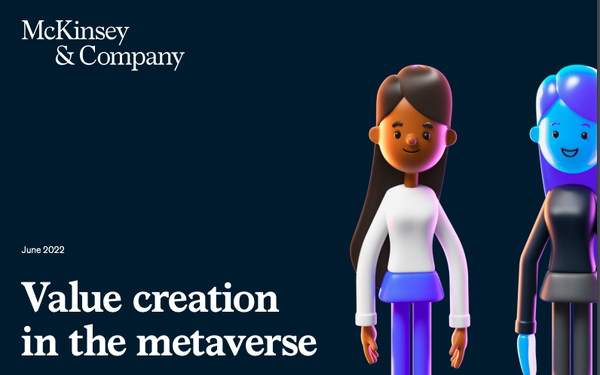 In what may be the most bullish outlook for the metaverse yet, McKinsey & Co. has released a report estimating it will become a $5 trillion economy by 2030.

The report, “Value Creation in the Metaverse”, is based on results from 3,400 consumers' and executives’ thoughts on metaverse adoption, its potential, and how it may ultimately shift people’s and business behaviors.

Since the start of 2022, venture capital and private equity firms have invested $120 billion in the metaverse – nearly double the $57 billion invested in 2021.

McKinsey found nearly six in ten consumers (59%) were actively engaging in metaverse activities today and were excited about the transition of everyday activities to the metaverse, such as shopping for virtual or physical goods (79%), attending virtual concerts and/or sporting events (78%), and exercising using virtual reality (76%).

The majority of business leaders (95%) expected the metaverse to have a positive impact on their respective industries within the next five to ten years. Only 31% expected it to fundamentally change the way their industries operate.

To describe the metaverse, and what tech it will likely require, the study breaks it into four distinct layers.

“Enablers” make up the base layer and consist of three platform categories ensuring security, privacy and governance, digital identity, and monetization.

“Infrastructure and hardware” include the devices and OS layers that make up what McKinsey is calling “the human interface layer,” as well as the infrastructure that powers the metaverse as a whole.

“Platforms” will facilitate the distribution and discovery of content, experience, and apps, and include a core set of tools––game engines, AI, design––for building 3D experiences.

At the top of the metaverse pyramid is “content and experience,” which is the layer many currently think of most: developer and first-party content, social and industry applications, and virtual worlds.

Several executives, futurists, and leaders in the metaverse space shared their thoughts.

Matthew Ball, McKinsey knowledge partner and author of the upcoming book, "The Metaverse: And How It Will Revolutionize Everything," said “There are many of the most storied companies on earth building a presence, and we have commerce in the tens and soon to be hundreds of billions of dollars.”

“We have Instagram. We have email. We have messaging. And then there’s our real-life friends; the real-life activity that we’re participating in,” said CEO of Niantic, John Hanke. “Sometimes there’s an intersection between those two.”

Finally, Irene-Marie Seelig, co-founder and CEO of AnamXR, said that “consumer behavior have largely shifted toward adopting digital personas, yet many brands have yet to provide a solution.”