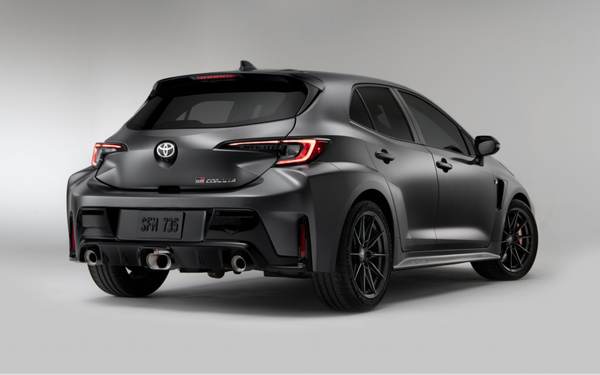 Toyota is rolling out several new vehicles including a refreshed 2023 Toyota Sequoia SUV and a 2023 Toyota Corolla with four new hybrid models.

The Toyota Sequoia, which goes on sale in late summer, is offering several notable improvements, including a more than 2,000 lb. increase in towing capacity over the previous model and some creative options for increasing the amount of interior cargo with a removable and adjustable cargo shelf system that holds up to 220 lbs. (Think California Closets for your SUV.)

The Toyota Corolla rolls into 2023 a changed car, with the line expanding with four new Hybrid grades, including a more powerful hybrid system and available all-wheel drive and a few halo special editions.

The first-Ever 2023 Toyota Corolla Cross Hybrid provides even more options for entry-level SUV customers. Available exclusively with all-wheel drive, the sporty vehicle’s surprisingly large cargo capacity aims to give it “the versatility to accommodate life’s adventures,” per the automaker.

The eye-catching GR Corolla Morizo Edition was named for GR Master Driver and Toyota president Akio Toyoda. This track-oriented version of GR Corolla was designed to meet specifications desired by Toyoda himself, with tight handling and a highly rigid body. Only 200 numbered units will be produced for model year 2023.

All of the brands’ upcoming marketing campaigns, including those for Sequoia and Corolla, will continue to use the Total Toyota (T-squared) approach of all agency partners working collaboratively on one cohesive effort, says Lisa Materazzo, group vice president of Toyota Division marketing at Toyota Motor North America.

“As the population becomes increasingly diverse, we think that just reinforces our go-to-market approach even more so, because we're able to tap into those diverse consumers,” Materazzo tells DriveTime. “That approach allows us to understand at a much deeper level how to speak to a particular audience,"  how to place the media, and how particular audiences are consuming media.

As with most automakers, EVs and hybrid and alternative fuel cell vehicles are important at Toyota. But rather than spend time and money trying to sell one powertrain against another, the automaker’s job is really more about how to educate consumers on how to choose what option is best for their wants and needs, Materazzo says.

“We have a lot of ways we do this in making sure they understand what is available to them in terms of electrified vehicles,” she says. “We have a lot of resources online. So we're using our owned channels like Toyota.com and also our YouTube channel. And they are a great central repository for a lot of information … as people try to navigate their way through what electrification means.”

“We are still being impacted by COVID protocol on set, and that's very tactical,” Materazzo says. “But it is something that takes more time, it takes more money. There's more complexity in it. But at the end of the day, of course we have to keep people safe on set.”

Supply chain shortages are affecting Toyota like every other automaker, she says, but interest in the brand continues to be strong, with visits to the company’s website increased “week over week, month over month and year over year,” she says.

“But the demand is there in the marketplace, especially with the vehicles that we've unveiled,” Materazzo adds. “People are excited, they're visiting our website. So we aren’t making dramatic adjustments. We're making adjustments on timing and media a little bit on the media weight, but we're constantly monitoring throughout the three tiers of our ecosystem to make sure that we have a presence in the marketplace and people have Toyota top of mind.”

Debuts of new models like the Sequoia and GR Corolla drove a lot of traffic, she says.

“And we capture that, and we get a lot of hand raisers from it,” Materazzo says. “I think for Sequoia, as an example, we drove 3 million visits to the upcoming vehicle page. And we had over 100,000 hand raisers from them. So those are people who are like, ‘yes, please keep me informed. I'm interested in this vehicle.’ So there's a lot of traffic online and clear demand that we’re seeing.”