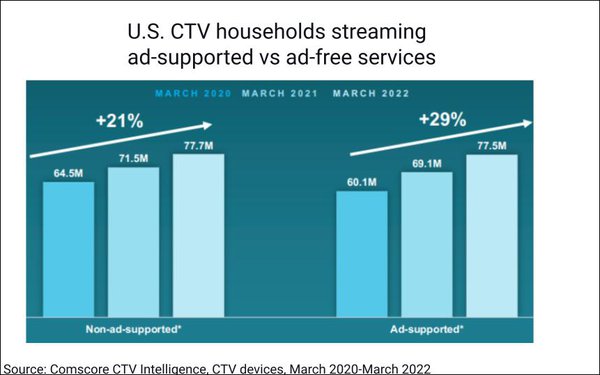 U.S. households with ad-supported video-on-demand (AVOD) streaming services are not only growing at a faster rate than those with subscription-based video-on-demand services (SVODs); they’ve essentially caught up to SVODs, Comscore’s State of Streaming analysis confirms.

“While both ad-supported and subscription-based streaming services are growing in the U.S., we’re seeing that consumers are being more mindful of their budgets and leaning towards ad-supported services,” observed James Muldrow, Comscore’s vice president of product management. “This makes sense as inflation continues to hit consumer’s wallets. The time is ripe for traditionally subscription-based streaming services like Netflix to consider launching an ad-supported tier to enhance their growth trajectory.”