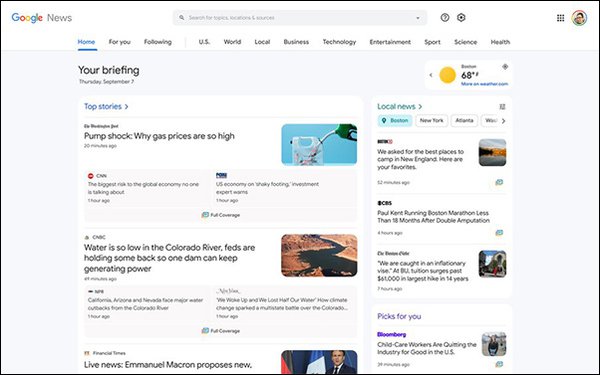 Google launched a new version of Google News on Wednesday, celebrating the company’s 20-year anniversary of the online news service.

The redesign highlights Top stories and Local news to personalize content and bring it to the forefront of the Google News home page.

The local news section at the top of the page allows users to add multiple locations such as Jackson, Wyoming and Huntington Beach, California. Users can add, delete or reshuffle the subjects that serve up on the page.

Google also expanded the Fact Check section in Google News on desktop to provide more context. Headlines will now include original claims along with the fact-checked assessment from independent organizations.

The announcement of the redesign also marks Google News' official return to Spain after about eight years.

In July 2014, the Spanish government started on a path to pass a proposal that would force Google to pay newspaper editors if they were aggregated in Google News.

When approved, Google excluded all newspaper editors from Google News and asked anyone who wanted to be listed to reapply. Reapplying meant they would renounce compensation. Most newspapers reapplied, as they did not want to miss out on the traffic generated, according to Julio Alonso, founder of Weblogs SL.

The updated site helps the Google News Initiative, which supports newsrooms amidst concerns that the internet is eroding access to quality journalism and spreading misinformation.

Google also began taking applications for a Global News Equity Fund that helps back news for minorities and underrepresented groups. They have until July 21, to apply for money. The tech firm is also handing out its first round of funding — $1 million — for a Data-Driven Reporting Project that helps communities with data-heavy investigations.

Google also announced the first round of recipients of The Data-Driven Reporting Project, a partnership between the GNI and the Medill School of Journalism, Media, Integrated Marketing Communications at Northwestern University.

The 22 winners are from the U.S. and Canada. Medill will provide training, expertise and resources to award recipients.

Google did not participate in the selection of jurors or individual projects. Applications for a second round will open later this year.