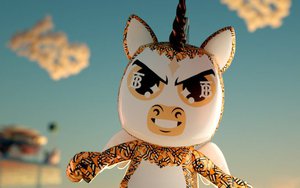 Image above: Burberry NTF of a branded unicorn named Minny B.

Add Burberry, Macy's and Old Navy to the week's retail NFT newsmakers, each cranking out fun new offers. But there are plenty of signs that last year's hot trend continues to lose its sizzle. And it probably didn't help that billionaire Bill Gates recently denounced the non-fungible tokens as -- more or less -- a bunch of hooey.

Burberry's news is that it's partnering with Mythical Games for the second year, launching a new NFT collection in Blankos Block Party. Starring a gentle-yet-cheeky unicorn named Minny B, it's meant to "evoke a sense of limitless possibility," per the company.

And those who already own Sharky B, the brand's first NFT character, will get a free Monogram bucket hat, due for release in the coming weeks.

Macy's is introducing a new NFT series celebrating its 4th of July Fireworks.

The retailer is dropping 10,000 of the NFTs for free on its new channel on Discord, the chat app.

"Macy's wanted to take the fun into the Web3 frontier, bringing the revelry to a digital landscape," said Will Coss, executive producer of Macy's 4th of July Fireworks, in its announcement. "These free Macy's Fireworks NFTs will help attract a new set of fans with an easy-to-access implementation that democratizes this emerging space for a mass audience while also embracing a digitally native audience."

Old Navy is also getting patriotic with NFTs, basing a new digital collectibles campaign on Magic the Dog, its trusty mascot.

Old Navy's Flag Tees have been part of the 4th of July landscape for almost 30 years. The latest campaign brings those classic tees into the metaverse, with 1,993 common NFTs priced at 94 cents.

Kelly Blumberg, head of graphics at Old Navy, noted that the company’s “customers and employees are passionate about community,” one reason to offer “another dimension of belonging in web3 with this super-fun, inclusive collection of digital collectibles that are truly accessible to all."

Interest in NFTs, although still immense, may be sputtering. A recent report from Chainalysis, a blockchain data platform, says that through May 1, collectors have spent $37 billion in the NFT marketplaces in 2022. That would seem to put NFTS on track to beat the total of $40 billion spent last year. But Chainalysis says that since last summer, growth has come in spikes rather than the steady gains seen early on in the trend.

And TechCrunch, citing The Block, says weekly NFT sales fell more than 70%, from a high of nearly 1 million in the third week of 2022 to just over 250,000 in its most recent week.

Microsoft founder Bill Gates, in a recent climate change talk for TechCrunch, dissed the NFT craze, saying it's "100% based on 'greater fool’ theory." That phrase refers to the concept that overpriced assets increase in value only because it’s always possible to find someone willing to pay more for them.