Sarandos: Netflix In Ad-Partnership Talks With 'All Of Them' 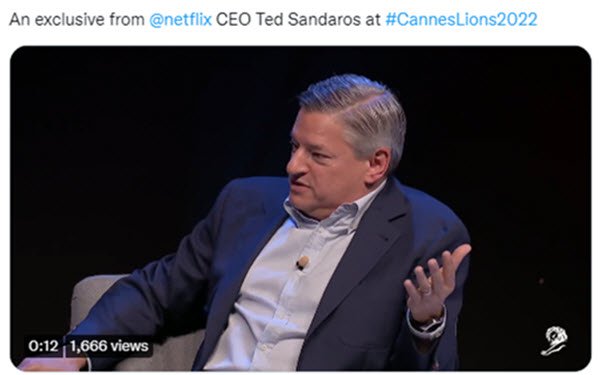 Netflix Co-CEO Ted Sarandos has now confirmed that the streaming service is developing an ad-supported tier, and has begun talks about potential ad partnerships with multiple companies. though he stopped short of naming them.

Asked about the rumor that Netflix might look to acquire Roku, Sarandos said: “I don’t know where that came from.”

He did, however, acknowledge that Netflix is not ruling out the possibility of owning its own advertising-tech operation if advertising “becomes so important that we want to have control over it.”

Commenting on the company’s about-face on offering an ad-supported version, Sarandos said Netflix now sees that it has been leaving a large potential customer segment on the table —people who want a lower price and are willing to watch advertising.

Netflix, reportedly pushing to launch the ad-supported tier by year end, plans “a pretty easy entry to the market,” Sarandos said. The company will “start light, keep it simple and iterate fast,” he added. “What we’ll do first [will not be] representative of what the product will be, ultimately.”

Netflix is under intense scrutiny from investors, with its stock down 70% year-to-date following its report of having lost 200,000 subscribers in the first quarter.

In fact, yesterday also saw the company lay off 300 more employees, following 150 layoffs in May, citing the need to cut costs.

However, Sarandos -- who was named Entertainment Person of the Year during the Cannes event -- again stressed that investment in content is more critical than ever to the streamer’s success.

Netflix spent more than $17 billion on originals and licensing in its 2021 fiscal year. During its Q1 investor call, Sarandos said it will continue to increase content spend, albeit at a reduced rate of growth.

At Cannes, Sarandos also reiterated that both streaming as a whole and Netflix in particular still have “a lot of room to grow.”

People are still watching a lot of linear TV as the shift to streaming continues, he noted, and Netflix currently represents “about 10% of what people do on TV, and about 30% of streaming.”