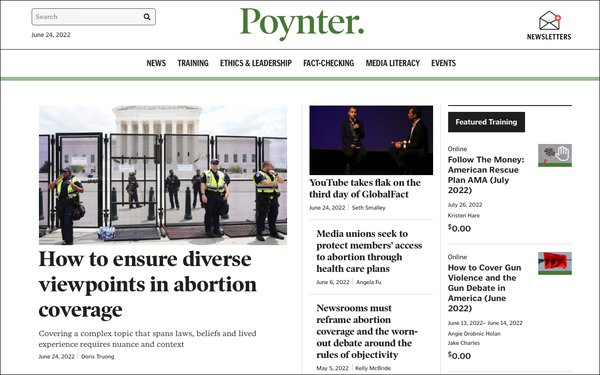 The Poynter Institute announced last week that its International Fact-Checking Network, a seven-year-old organization dedicated to creating a community for fact-checkers in a time of broad expansion of misinformation, has launched a legal support fund for organizations facing threats of harassment, intimidation or litigation.

In a report published on June 23, Poynter Marketing Communications writer Sara Bealor noted that the legal support fund comes at a critical moment for fact-checkers as they seek to debunk false claims. Many news organizations have established significant fact-checking teams in the last several years, and independent fact-checking organizations have also emerged, as conspiracy theories and malevolent accusations have proliferated, especially on social media.

In particular, the need for fact-checking heightened during and since the 2016 election, as misinformation and disinformation flooded onto the social platforms, Facebook especially. Organized disinformation campaigns from state actors could credibly be said to have influenced the outcome of the election. Over time, both Facebook and Twitter started adding fact-checking labels to post on their platforms.

Around the world, fact-checking teams have faced a more intense level of harassment, according to IFCN. Last week, the Poytnter report said, fact-checkers from 85 different countries met in Oslo, Norway, where they outlined the increasingly hostile environment for fact-checkers and sought ways to mitigate it.

“Fact-checkers around the world are experiencing harassment and online abuse in different forms and capacities,” IFCN Director Baybars Örsek was quoted as saying in the Poynter report. “We are excited to offer a sense of support to organizations facing those challenges on the ground and working toward finding sustainable solutions to navigate increasing attacks on journalism and fact-checking.”

The legal support fund was made possible by Meta’s renewed support, and by the Google News Initiative’s yearlong partnership with IFCN, Örsek said.

Up to $40,000 is being made available for each eligible applicant, Poynter said. Organizations can use the funds to hire a media defense lawyer in disputes directly related to fact-checking or reporting -- such as issues of defamation, copyright, fair use and licensing. The fund will be administered by IFCN.

“We’re thrilled to partner with IFCN on this crucial initiative to protect fact-checkers from harassment and provide the financial support they need to address the unique challenges they face,” Meta News Integrity Program Manager Karishma Shah said. “The Legal Support Fund is a critical part of our ongoing effort to support fact-checkers and connect them with resources to mitigate the risks they face as they work to debunk viral misinformation.”