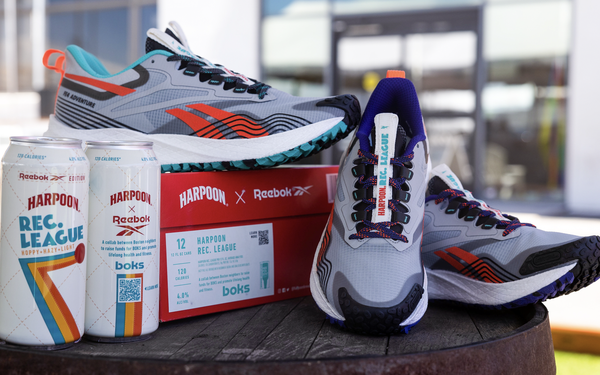 Harpoon Brewery and Reebok, both based in Boston, have combined resources to produce a specially packaged beer and a co-branded running shoe.

A portion of every sale will go BOKS, a free physical activity program designed to get kids active.

The Reebok x Harpoon Rec League Floatride Energy 4 Adventure Running Shoe is a limited-edition release, in Harpoon’s colors of aqua and red,that will be awarded to 10 winners of a sweepstakes running through July. Reebok plans to introduce a non-co-branded edition of the same shoe in August.

Like Reebok, Rec. League cultivates an active image, down to its healthy-sounding ingredients, which include buckwheat kasha, chia seeds, Omega-3 fatty acids and antioxidants.

“Rec. League was the first beer we created that both complements an active lifestyle and embodies our ‘love beer, love life’ motto,” noted Dan Kenary, chief executive officer and co-founder of Harpoon.

Harpoon Brewery, founded in 1986, has distribution in 23 states, with the heavy majority of sales in the Northeast. It also operates tap rooms in Boston and Windsor, Vermont, both of which will be selling Harpoon Rec. League — The Reebok Edition on tap.