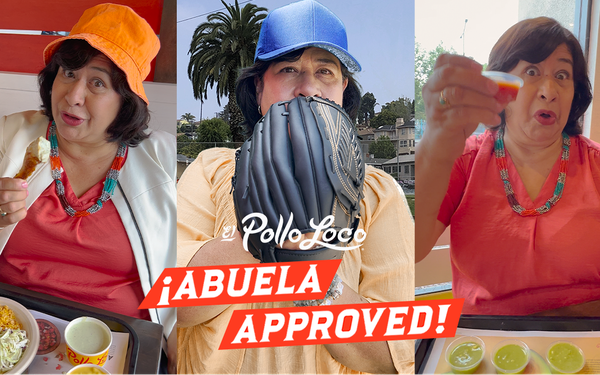 El Pollo Loco is using a TikTok-ing grandma to help it reel in Gen Z with a new "Abuela Approved" campaign on social media.

The effort combines the brand's commitment to authenticity with an extra side of salsa while zeroing in on unique bonds within families.

"The Abuela campaign is about the whole notion of Gen Z and their grandparents," says Andy Rebhun, El Pollo Loco's chief marketing officer. "There's a little bit of a generation gap, but it's narrower than it is normally perceived to be."

The Los Angeles-based company "has been leaning into TikTok a lot more, as we try and attract a younger audience. Grandparents are the focal point of Hispanic communities and families, and we felt we could celebrate that with joy, humor, love, and, obviously, our food."

Rebhun tells QSR Land that welcoming the "Head Abuela in charge'" is all about entertainment and aimed at increasing one-on-one engagement rather than specific viewership metrics.

In the campaign, Abuela offers sassy, comedic commentary on everything from crypto to "your latest outfit." (She's not a fan of either.) But she's given her stamp of approval to the fire-grilled chicken.

So far, the chain's TikTok views have ranged from 5,000 to more than four million. "And while we'd like to get lots of views, we're more interested in the quality of the interaction. It's about building bridges and making authentic connections with that TikTok viewer," Rebhun says.

With 480 restaurants, primarily in the Southwest, roughly 35% of the chain's audience is Hispanic, but everyone will get the Abuela vibe. "There's a higher understanding of Spanish and Hispanic culture -- it's core to the foundation of Los Angeles."

The brand's sweet spot is usually a consumer between 45 and 50. With this effort, it's looking to build awareness and connection with those between 18 and 34, a generation of cord-cutters more apt to be viewing short videos on their phone than watching TV.

Rebhun keeps a close eye on how other restaurant brands use TikTok, including Applebee's with its mega-successful "Fancy Like" effort.

But there are no definitive plans yet to find a broader use for Abuela in the chain's marketing. "We'll see where there are opportunities to integrate her with the brand in the future," he says. "But we're not going to force something."

As the chain continues to roll out Abuela skits, there will be more connections to its emphasis on authentic and fresh ingredients. "It builds that connection nicely because family and eating around the table is a big priority in families and Hispanic culture."