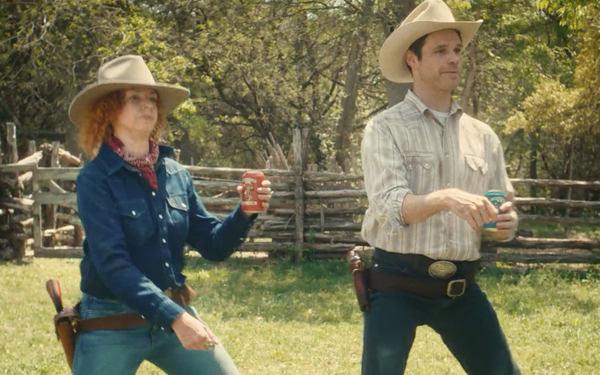 Ad campaigns for burgeoning hard seltzers and RTD spirits seem a dime a dozen these days.

So why are we writing about the first brandwide campaign for Ranch Rider, a three-year-old player out of Austin?  Because the brand’s creative agency, Austin-based Callen, has forgone an agency fee in return for an equity stake in the business.

The campaign itself is cute. In a self-mocking Western-themed :30 spot, for example, two ranch types, female and male, are seemingly riding horses, but the visual shows only their upper bodies.

The fella explains what's in Ranch Rider and then says, “Who knows, maybe someday if we sell enough of these, we can buy us some real horses." The view widens to show that both cowpokes are simply pretend-riding. “Don't get cocky,” replies his riding mate

Are the commercial’s protagonists perhaps stand-ins for the client and agency, who both now have a stake in selling more and more cans of Ranch Rider?

“We can be great at making ads, but we want more from our partners in today’s market,” Hughes told Marketing Daily. The dynamic of ‘I pay you money in exchange for a specific set of deliverables’ isn’t exactly what we’re chasing with Ranch Rider. This is a young, very successful brand that wants us at the table when they’re talking about their business -- not just their marketing needs.”

The humorous tone of the new campaign, whose tagline is “Simply the West,” seems to be right in keeping with Ranch Rider’s ethos.

“Most Western brands take themselves very seriously and feature hard-working cowboys doing chores,” Ranch Rider co-founder and chief revenue officer Brian Murphy stated. “We started this brand in the back of our food truck, mixing up cocktails between shifts and goofing off with our customers. We wanted this campaign to reflect this sense of joy, and the weirder we are, the more likely our customers are to find [us] engaging.”

Ranch Rider, sold in 35 states, has been on a rapid rise. The brand cites industry statistics showing it as the #18 top-selling spirit-based RTD in the U.S., its Margarita as the top velocity SKU, and its Ranch Water as the top spirit-based ranch water. Other flavors include The Buck, Tequila Paloma, The Chilton and Jalapeño Ranch Water, which first launched as a limited-edition item last year via a Callen campaign.

The campaign’s target audience is new and existing consumers from the mid-20s to mid-30s. “men and women settled into early adulthood with a Western attitude of wide-open possibilities alongside their friends,” the brand told Marketing Daily.