New Larry The Chicken Character Struts His Stuff For Bojangles 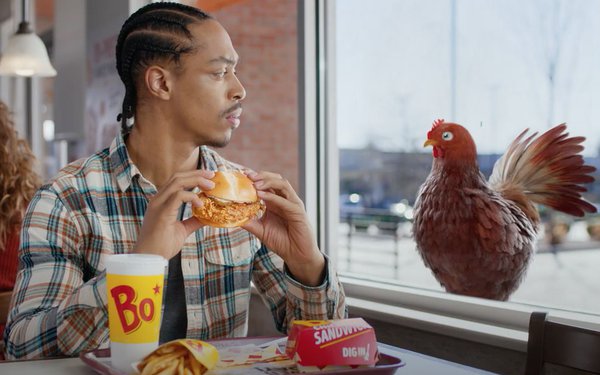 What do you call a chicken who is obsessed with eating… chicken?

In the case of Bojangles, it’s Larry—a new, animated character for the QSR chain in a campaign that places craving above factors like convenience and value offers in consumers’ pecking order.

After the voiceover in this “Meet Larry” spot from the EP+Co agency introduces Larry walking up to a Bojangles in North Carolina, the camera cuts to an image of the chain’s hand-breaded chicken sandwich.

Larry then peeks into a drive-through window to watch staffers preparing chicken sandwiches as the voiceover explains how much he craves it—even though he knows he shouldn’t. “And before he knew it, his little chicken heart belonged to Bojangles forever.”

The spot ends with Larry pecking on a window as a perplexed customer enjoys a chicken sandwich and a drive-through staffer yells “Larry, people are trying to eat!”

The campaign and its quirky, 23-inch-tall character—created in-house based on a stock photo the agency found online—seek to communicate product quality above all else, according to EP+Co chief creative officer John Cornette.

“We didn’t want to be a part of the clutter of the sandwich wars,” Cornette tells Marketing Daily. “We think we have a better sandwich. A lot of online testing will tell you that. The influencers are telling us that.”

While the initial focus of the campaign is on the Bojangles chicken sandwich, it’s a safe bet Larry will find other menu items equally as irresistible.

What’s the distinction between a brand mascot and a character?

“We’ve been very careful not to call him a mascot and not to have him overshadow the brand or the people who make the food,” adds Cornette.